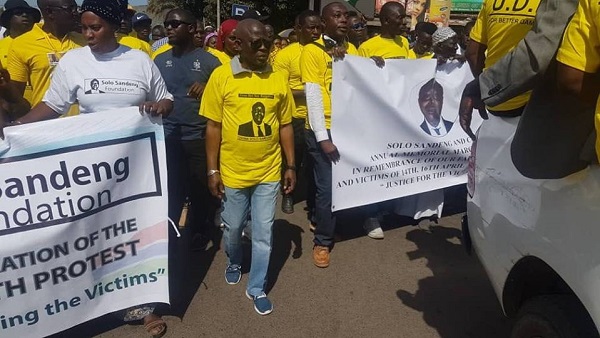 In comrade Solo Sandeng, the Gambia have lost yet another giant and icon of the second liberation struggle. It is a matter of proud historical record that no amount of repression and brutality could extinguish the intense fire of freedom and justice which burned inside Solo Sandeng.

For generations, pro-democracy activism has conditioned its followers to believe that there are only two responses to oppression or injustice — flight or fight. But there is a third, more excellent way. Resisting injustice in a nonviolent way seeks to change the system while enabling those with opposing viewpoints to see the error of their ways.
This third method of resisting an oppressor is what inspired Comrade Solo Sandeng and his pro-democracy activists, who have shaken up the country’s political status quo on the path to end more than two decades of entrenched dictatorship and usher in a fledgling democracy.

Boisterous, short and intimidating, Sandeng’s militant opposition laid bare the crisis of legitimacy facing President Yahya Jammeh. “Protest” that tried and tested silencing tactic of so many colonial and post-colonial regimes, was employed. But it only deepens the crisis. The Westfield Junction protest on April 14 stirred a deep-seated radicalism in many young people that may not soon fade.

Sandeng dared to dream of democracy, freedom and justice for his country and his people despite the firm hands of dictatorship that held sway. By standing up for these ideals, Sandeng inspired a generation, planted hope in down-trodden Gambian electorates and loosened President Yahya Jammeh’s suffocating hold on the people and the nation once regarded as the “Smiling Coast” in Africa.

Until his death, Sandeng remained a source of inspiration to a generation of youth activists across the continent. His death leaves a void in a country that still needs strong and vigilant political youth leaders of change to return to the path of democracy and freedom. I pray that the party Solo was a member, the UDP, will hold firm and pursue the convictions, ideals and principles for which he lived.
Sandeng’s trademark smile on a black and white background now immortalizes the struggle of conscience versus state power.

But the emblem is also a reminder of the difficulties of attempting legal revolutions. Sandeng has stirred a deep revolutionary instinct in the restless Gambian youth. His face has become the face of hope.
Let Gambians remember Solo did not ask to be sanctified. He was a political prisoner of conscience. Literally and figuratively. Solo did not have the ovaries to even carry all the expectations of 1.9 million Gambians. He was a towering figure and became a political colossus of the Gambian liberation struggle.

The government’s attempts to conceal details of Solo Sandeng’s death have made its intentions very clear. Although, designed to psychologically break the spirit of resistance, the consequences of protest always outlive the crises that set them off in the first place, and, at times, spark larger fires.
This was nothing more than the wishful thinking of a regime intoxicated by the fading illusion and the mirage of permanence created by the sophistication of its weapons bought to support what was temporary power.
It’s true you don’t need violence to be heard, but it’s ignorant and false to state that Yahya Jammeh’s fall has come without violence.

Take a bit of time to learn the very long history of protest during the changing Jammeh regime, one that includes violent suppression of Sandeng and his group by Jammeh’s forces. Gambians be glad that you have youth who are trying very hard to walk the path of change despite a sputter of targeted government attacks on protesters.
Africa’s eyes should be trained on Gambia because so far, the choices made toward the second liberation are ground-breaking. Gambia is testing the waters of nonviolent revolution through non-corporation against corporatocracy, using the legal system to paddle through the murk of institutional incompetence, greed and manipulation by political thugs, and protesting through well-reasoned blogging counter to pervasive propaganda.

Even death itself cannot claim victory. It is shamed because it does not have the power to erase from memory, the dedication, the commitment, the willingness to sacrifice and strength of the human spirit to fight for the cause of freedom and justice which Solo Sandeng represented.

I couldn’t be prouder of the Gambian resistance at its nascent stage as it tries to fight an ogre that’s rooted its feet in Gambian soil for 22 years. I suspect an angry government will still fight to retain power with violence, but I hope this resistance soars. It needs a center, so the various fronts can hold.

In the words of the English poet, John Donne: “Death, be not proud, though some have called thee Mighty and dreadful, for thou art not so; … One short sleep past, we wake eternally, and death shall be no more; Death, thou shalt die.”
May Allah grant him the highest Jannah.