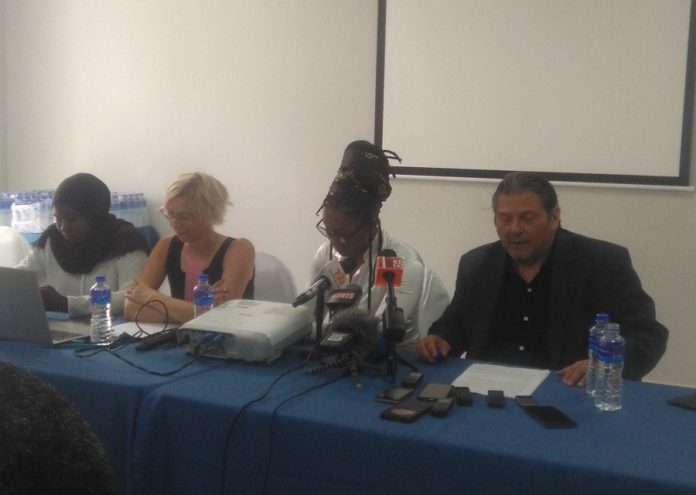 A famous singer, Fatoumatta Sandeng, has revealed how she may have escaped a rape trap at Kanilai by former president Jammeh.

The former lead vocalist of the famous Humanity Stars, who is also the daughter of the slain prodemocracy activist Solo Sandeng, said at a press conference organised by Trial International that Yahya Jammeh had treated Gambian women as his properties.

“He would employ women as protocol staff but their actual duty is satisfying his sexual desire,” Sandeng alleged.

She then went on to narrate a personal experience which she said was an apparent trap to get her raped by the president.

“Jammeh once sent his guards to pick me up from Westfield Jacaranda.

One Jimbe Jammeh, a woman was there with a very tough looking man, saying that president Jammeh wanted to meet me.

I called my Dad and told him that I was heading to Kanilai in case anything happened to me,” Sandeng said.

She explained that her father had always objected to her going to honor Jammeh’s invitations even though Jammeh kept inviting the band at every music event at State House or Kanilai.

She said when she reached Kanilai, she was
escorted to a room where she was handed a white cloth.

“I had to tell Jimbe that something has happened I needed to go, but she insisted that soon Jammeh would meet me, and after that I can go.

Somehow Jammeh never came but he arranged for some money to be sent to me and this is how I think I escaped a possible rape,” Sandeng narrated.

Meanwhile Fatou Toufah Jallow, who started the rape allegations against Jammeh, also gave more details about the nature of the alleged rape.

The press conference was called by human rights groups who are working on bringing the former president to justice by gathering as much evidence as possible from his victims.