The commodification of public office by the infamous 40 NAMs: Is the ‘loan scheme’ even lawful? 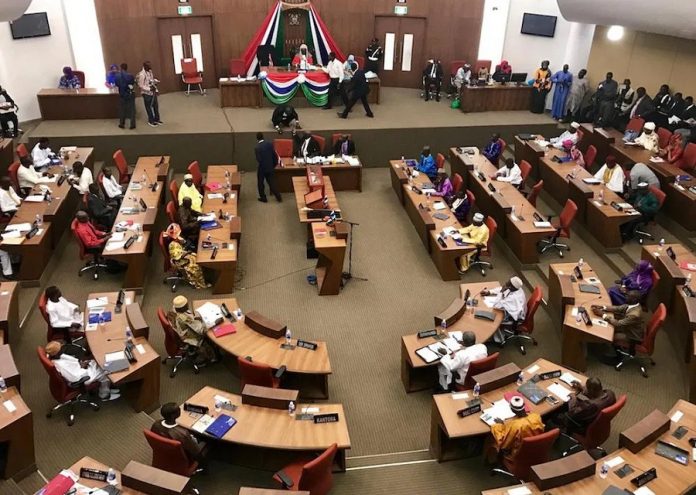 A key objective behind the design and concept of republican governance is, to prevent a total autonomy of any of the three arms of government (the Legislature, the Executive or the Judiciary) from the other or the rest of the State edifice at the expense of the State and hence the existence of checks and balances as a countermeasure to tame any excesses. Historically, in our case that is, it is the Executive (the President and Cabinet) which has the infamous reputation of being the naughty partners out of the trio — usually transgressing, stretching and testing boundaries of acceptable conduct as well as allowances of their lawful authority, an adventure which the current administration hasn’t had the luxury to excel in thanks to unprecedented legislative scrutiny by this 5th National Assembly.

Whilst there’s little to fault in this 5th Assembly’s exercise of its oversight functions in comparison to previous ones, the same cannot be said of its commitment to the exercise of self-censorship and restraint especially on matters which are so fundamental to its integrity. The circumstances which gave rise to the widely condemned D54 million ‘loan scheme’ is a classic example of such dishonourable attribute. With the gate-keepers now turned gate-crashers, one wonders whether or not our existing trust in our democratic institutions is reliant on sets of values which these no longer hold or, whether these historically existed of their own accord anyway. In the case of our Parliament, this is too important a question to leave unresolved. But, before frogmarching to discuss what an appropriate resolution to such is, it’s perhaps logical to first and foremost begin with establishing the mischief at hand.

The general public condemnation of the subject matter appears to be one firmly hinged on moral grounds citing: the economic downturn in light of COVID19, the defunding of other public priorities, National Assembly Members (NAMs) emulating the vice they exist to challenge etc. Whilst grounded on firm basis, such morality litmus test implies that the unparliamentary conduct or ‘loan scheme’ so to speak would be flawless but for these moral issues; also, such generously presumes the presence of a moral compass where clearly none exists at all — otherwise the issue won’t arise in the first instance, would it? Additionally, the subjective nature of morality makes it a very tricky obstacle to navigate and besides, the case advanced by proponents of the subject matter was one in law, therefore, it’s only fair that any challenge to the contrary is addressed on the same wavelength.

Nominated NAM, Ya-Kumba Jaiteh argued that “…it is in the Constitution that National Assembly Members can decide their salaries, benefits and allowances…it is a benefit that we’re trying to get here, this is law, we are making law here, we can make it now and it becomes law.” It’s perhaps helpful to detail the letter of the law (“the Constitution”) which the nominated NAM references as authority in support of her proposed ‘loan scheme’ being section 95 of the Constitution which states:

Furthermore, section 100(1) of the Constitution vests law making authority in the National Assembly.

On a technical but very important point, the respective authority for NAMs to make law with respect to their “remuneration and benefits, including retirement benefits” as stated at section 95 is one limited to “The Speaker, the Deputy Speaker and the other members of the National Assembly” — such constitutional authority impliedly excludes National Assembly staff. Therefore, even if those concerned are inclined to argue against every other credible argument against the lawfulness of their ‘loan scheme’ so far, this technicality would nevertheless still render such scheme an unlawful endeavour because the respective ‘loan scheme’ expressly included National Assembly staff as beneficiaries. For clarity, the National Assembly has no such authority under the respective authority the mover of such motion relied on being section 95 of the Constitution nor under any other respectable alternative.

So, all in all, it is authoritatively established that the:

–           National Assembly does not have authority to create an additional budget line to budget estimates tabled before it pursuant to section 152 of the Constitution; section 152(1A) clearly details the role and extent of the NAMs’ authority.

–           National Assembly does not have authority under section 95 to exercise such authority except where it does so in connection with the enactment or amendment of a piece of legislation; section 95 expressly details words to this effect.

Evidently, from a legal standpoint, the construct of this commodification of public office scheme in question is so poorly thought through, it has no scintilla of legality and one wonders how it even slipped through the Assembly filters and compliance mechanisms. It has so many holes, it wouldn’t fly past any meaningful legal scrutiny. It mustn’t be allowed to fly either. Otherwise, a very dreadful precedent will be set to the effect that members of the legislative arm of government whom are so inclined, will year in year out go beyond the bounds of their authority as if to blackmail the Executive and mug taxpayers off in order to hamper the sound appropriation of public finances for their dishonourable ends or for the benefit of priorities other than those which serve the national interest. The letter and spirit of section 152 is very clear and it is now for the Executive to exercise its constitutional duty and sound judgment under checks and balances to put this legislative ultra vires to bed and for good. It is wholly undesirable for a precedent to be allowed to take hold and to the effect that elements within the legislature could seek to undermine and disrupt the business of government through the exercise of an authority they do not even have.

The fact that such a scheme has emerged from those whom are supposed to be in the service of the public is bad enough never-mind the pitiful logic which informs it. However, the fact that such went past the Speaker is even more of a national indictment on us. One wonders what the essence of a House Speaker is, if not to ensure that the business of the chamber is conducted in propriety, in accordance with law and in a manner, which does not undermine the integrity and dignity of the institution.

Out of all the Executive protests against the legislature, it is safe to state that this is about the only legitimate one. On this occasion, the Executive can take comfort in the fact that the ‘loan scheme’ proposal is not law but, “advice” following an “authorised consultation” under the Constitution of which section 231(4) of the Constitution states that:

The Executive (or the Finance Minister) is therefore not obliged at all to comply with such “advice” and can lawfully disregard the ‘loan scheme’ proposal in its entirety in the budget estimates for the Appropriation Bill for 2021 Fiscal year. The abysmal, unlawful and unparliamentary “advice” ought to be wholly disregarded, this is what the public would expect.

It is without any doubt whatsoever that, as far as scrutiny goes, this 5th National Assembly has so far done a very good job of it; it is now for the Executive to do its part. It’ll of course be out of order to suggest that the Executive reciprocates the ‘favours’ so, one must certainly not extrapolate such a suggestion from my commentary either. However, on this occasion and for such a fundamental issue, in the alternative to disregarding such unparliamentary “advice”, it’s not only right and proper that, the Executive invites the wisdom of the Supreme Court but the Executive is duty – bound to do so in order to among other things, salvage the reputation of the institution and restore the dignity of the National Assembly. This is what the public expects. It is a duty, not a discretion. Besides, National Assembly conduct (or misconduct for a more fitting term) is not exempt from the jurisdiction of the courts as helpfully affirmed at section 231(3) of the Constitution which states:

I trust and hope that the Executive will dutifully consider its options and do what is right for the good of all.