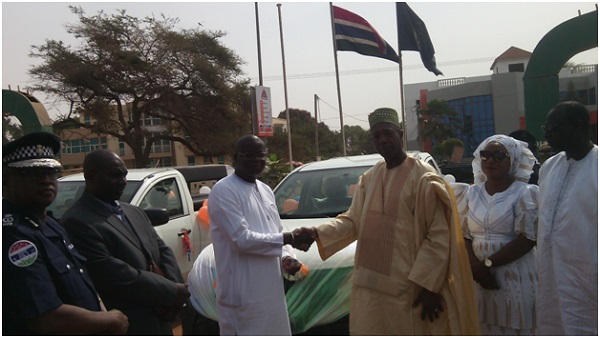 The achievements of the tourism industry since the ousting of Jammeh is one reason Barrow government was able to introduce a 50 percent salary increase, tourism minister claimed Wednesday.
He said the sector will continue “to deliver significant contribution” to the Gambian economy.

The government announced the introduction of a 50 percent pay hike for civil servants which commences from January this year.
And the vociferous minister said his ministry should get recognition for contributing to the “unprecedented achievement.”

“The amount of money generated from tourism directly or indirectly gets into the lives of every Gambian,” he said as he presided over a ceremony where two new pickups were donated to tourism security by the Gambia Tourism Board.
He called it the “collective responsibility of all Gambians” to stand firm to protect the industry, which he said is faced with “serious” security challenges.
Despite, he said out of all other destinations, The Gambia is ranked “one of three best and safest tourist destinations” in Africa, second only to Tunisia and Senegal.
“We thank God that Gambians have stood firm in defending this industry to become one of the safest destinations all over the world,” the minister said.
He praised President Barrow for attaching “a huge importance” to the tourism industry and its security.

“He is committed to realise an unprecedented 350,000 tourist arrivals in [The Gambia in the] next two years.”
He revealed that the Barrow government is currently studying an additional round of salary increment for Gambian service men, women and all other public sectors by 2020.
He said the government is aware of the difficulties faced by the security and other civil servants in terms of remuneration. Bah said more needs to be done especially for “our men and women in uniform” to ensure they enjoy “decent living standards.”

Interior minister Ebrima Mballow reminded the men and women in uniform of the mandate of the security anywhere in the world to “remain apolitical”.
He advised them to “desist from tribalism and nepotism” to stay true to their profession and do justice to the nation.
“I enjoin you to desist from any political activities and do your duties to the best of your abilities,” he said. “We are men and women of impeccable characters and should not allow our integrity to be put into questions.”