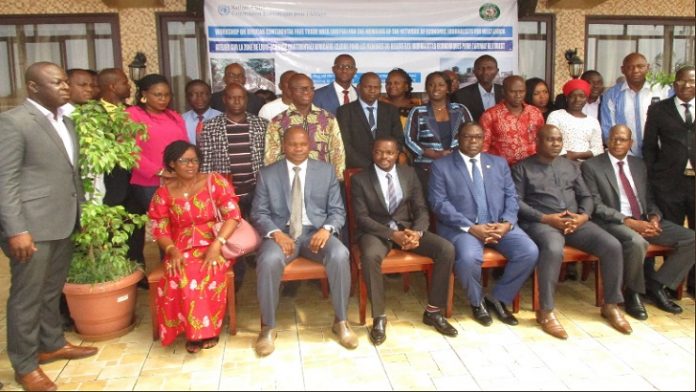 Economic journalists from across West African have undergone a three-day workshop on African Continental Free Trade Area (AfCFTA) as part of efforts to improve advocacy for the ratification and implementation of the agreement.
The meeting in Monrovia, Liberia was organised by the sub-regional office for West Africa of the UN Economic Commission for Africa (ECA) from 5 to 7 February 2019 for members of the Network of Economic Journalists for West Africa.

The event was designed to improve the quality of media coverage of AfCFTA-related activities in West Africa by enabling journalists to fully understand the various steps of the process, be informed about the negotiation parameters, and properly understand the stakes of negotiations for countries.
ECA West Africa acting director, Bakary Dosso, said the meeting was an opportunity to exchange and inform the members of the network on the ins and outs of the continental free trade area.

“This will, we hope, enable our journalists to be better equipped to inform the public and key stakeholders on the ongoing process of the African Continental Free Trade Area.”
The agreement for the creation of AfCFTA was signed by 49 countries in Rwanda in March 2018. After the signing, 22 countries have to ratify the agreement before it could enter into force. So far, 18 countries ratified. Ethiopia ratified last week but is yet to deposit the instrument of ratification to the African Union. After Ethiopia, three more countries need to ratify the AfCFTA for it to take effect.

The ECA West Africa boss expressed optimism that the engagement with the media in the sub-region will lead to a better advocacy for the ratification and implementation of the AfCFTA, and to ensure better visibility and dissemination of African development agenda.
Tei Konzi, ECOWAS Commissioner for Trade, Customs and Free Movement, said that a study of the potential implications of AfCFTA on the ECOWAS member states, under the supervision of ECA, is underway and that the conclusions will help make substantial decisions for the rest of the discussions.

The Liberian deputy minister of administration for the Ministry of Commerce and Industry, Mr Wilfrid N. Bangura, said the meeting with the members of the Network of Economic Journalists for West Africa is expected to boost visibility and wider dissemination of information and issues relevant to the sub-region for economic and social development of its member states.

Darboe, Barrow urged to reconcile ahead of December polls

July 28, 2021
Thunderclap from a cloudless sky: The journalist, politician and the audience Dear editor, The past few weeks have been very eventful as far as Gambian media is...