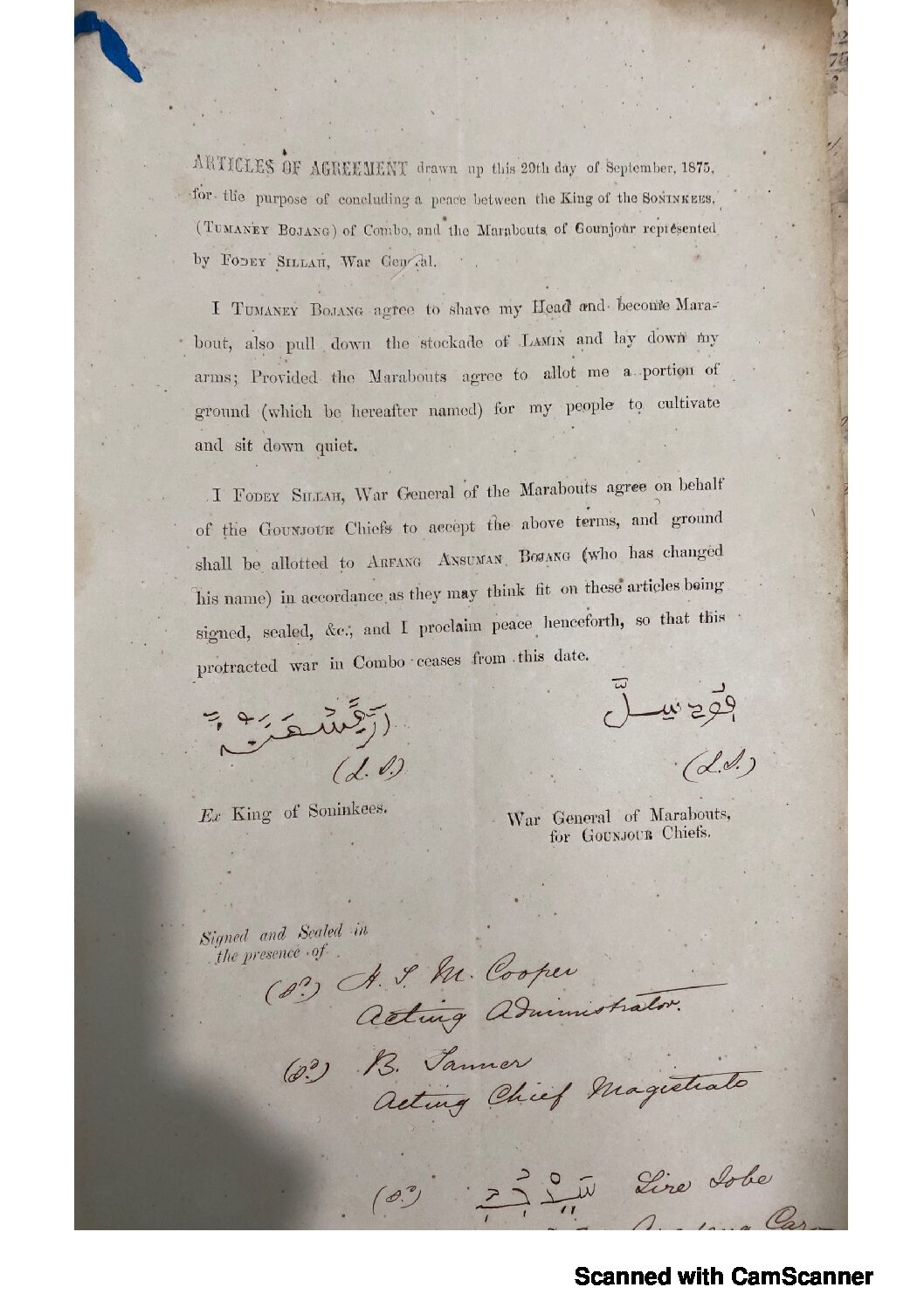 Kombo as a state continues to interest me because there are underlying issues which can only be understood if we can find answers to the following among others. A state rich in history and documented more than any of our pre-colonial states.

1. Define FONI, its beginnings and its reaches.

2. Define NAA RANG, its beginnings and its reaches.

3. Define AFET, its beginnings and its reaches

4. Try as much as possible, ascertain which clans founded which regions.

4. Define KOMBO, its beginnings and its reaches.

5. Ascertain which of the three: AFET, NAARANG or KOMBO is the supreme political authority and which is/are the vassal states.

6. Determine the seat of power for the three.

7. Determine if there were parallel powers working either in unison or divergent.

8. Establish a migration timeline for these clans.

Until we find answers to the above and more, the land dispute in today’s KOMBO will never be solved.

With the recent hikes in land values, stories and counter stories are abound.  Some genuine but drowned by the voices of land barons as in the case of Babylon and others that have no legitimacy but packaged enough to attract mainstream sympathy due to power and influence.

For the purpose of this article, I will not delve into these issues.

For now, I am trying to lay bare my thesis that in addition to the Bojang and Jatta, the Touray of Gunjur must be added to the list of clans that ruled in Kombo.

For most Gambians, Soninke Marabout Wars were all about Foday Sillah and tend to forget the earlier players the likes of Foday Ousman of Sukuta; Omar of Sabiji, a Mauritanian by birth and who saw campaigns in Algeria under Abdel Kabeer and Foday Kabba Touray of Gunjur. Foday Kabba Touray first emerged in Gunjur and the person who had a showdown with Jomba Bojang, the king resident in Brikama. After he died, his younger brother Kombo Silla Touray took over. It was not until 1868, when Kombo Sillah emerged on the scene as a leader. Another Foday Kabba, who operated in the interior of the country, was a Dumbuya.

In many instances, the Marabout wars were defense mechanisms triggered around 1853 when the people of Gunjur came under heavy taxation from Mansa Jomba Bojang of Brikama when they resisted. (Sarr). In addition, the role of Liberated Africans have not been sufficiently studied and incorporated into the school syllabus but they have also fueled the wars. That is a subject for another article.

There are oral accounts that the Brikama King was very harsh on Gunjur and on occasions, when some people of Gunjur fell out of his favour, he would make them climb trees and they would be subjects of a shooting target practice and fall to their death. Long story short, war broke between the Marabouts and the Soninke royals of Kombo. Suling Jatta was killed by the Marabouts in 1855. The Brikama King sought protection of the British who refused and by mid-1874, Brikama fell to the Marabouts.  (Gray, pp 454).

Slowly the royal houses of Bojang and Jatta were crumbling. Busumbala was still standing despite the death of their king which according his own family members, it was a palace coup.  Suling died by the hands of his own kinsmen. Busumbala was known for that and Makasutu is in the heart of this incident and to this day, the crown in Busumbala is said to be in that forest and glows at night.

The royals were running and many to Sukuta to set up a stockade. The Acting Colonial Administrator destroyed these stockades of the fleeing Soninke “as he considered it endangered the security of our people residing near the boundary”

After Sukuta fell, Foday Sillah signed a treaty and among them was to create a demilitarized zone between Yundum and the British boundary.  No stockades were to be erected there and no towns allowed there. But ground nut could be cultivated by British subjects and royalty paid to the local overlord. (Ordinances of the Gambia,  1875). This is why up to today, only groundnuts is cultivated there. Old habits die hard. Groundnut grows best in the open and not under trees and because it does not grow tall, it serves as a check to surprised raids that were often launched against British Kombo.

This zone is most likely the lands covering yarambamba , behind army camp to present day Sinchu all the way to Tabokoto. Remember, British Kombo stopped at Lamin Bridge.

The land Yundum is fighting for today is probably the buffer zone created and I hope our Army is aware that the Yundum Camp is located on a land that was once a demilitarized zone. They don’t need to give the example of the one between North and South Korea. That is too far frm home.

Busumbala fell in June 1875 and they ran to British Kombo where they were disarmed by the Police. The rest under Tumani Bojang ran to Lamin and erected stockades 400 meters from the British boundary. Mansa Tumani Bojang was offered asylum to reside in the Ceded Mile around Barra which he refused.

“At length on 29 September 1875, the last of a dynasty , which had ruled the Kombo for over two centuries or more, assented to a peace on the most humiliating terms. He agreed to shave his head, become a Marabout, adopt a Mohammedan name, lay down his arms, and destroy his stockade. In return for which Fodi Silla agreed to give him and his people lands, which they might cultivate”. (Ordinances of the Gambia, 1875)

Tumani Bojang by this agreement lost all his land and Fodi Sillah would decide which lands the Bojangs could cultivate.  Effectively, the Touray of Gunjur became the rulers of Kombo by this surrender. Attached is a copy of the terms of surrender executed by both parties.

In any war, the victors are never welcomed with open hands nor do the vanquished easily recognize their new overlords. I would expect that to save a little pride but the die is cast. It reminds me of Saddam Hussein’s information Minister who said that the Iraqi army was slaughtering the Americans and burying them in mass graves even when American tanks already surrounded his office.

It’s a bitter pill to take but Gunjur became the seat of power in Kombo from 1875 to 1894. Remember that this period predated colonialism. No other political authority in Kombo emerged until colonialism set in 1894 with the enactment of the first Protectorate Ordinance of 1894. The rest that came were not kings but colonial chiefs appointed by the Governor/Administrator depending on when in history. The two are different.

Kombo royal houses of Jatta and Bojang both surrendered.  Whether you want to call Sillah a religious leader, he was also the political leader and was recognized so. He was even paid a stipend by the British until 1894. To no other was a stipend paid as far as my research is concerned, except the Touray.

Certainly during this period,  the Protectorate Ordinance had not extended to Kombo and Kombo definitely was not a State without a ruler. The recognized power was the Touray of Gunjur.

When a former king was negotiating for land to farm, i am scratching my head regarding the fate of his subjects.

We must also train Archaeologists,  Anthropologists, Forensic Scientists and so on to help piece together our past. We may be surprised by what we may find. The answer is not above ground but below. We will encounter their tools, artifacts and perhaps burial grounds and may be unlock the story of our stone circles and human footprints on stones.  Our ancestors are beckoning to us to find them. I don’t know about you, but i am trudging on.

Power shift in Kombo and Gunjur 1875

With the surrender of Tumani Bojang power shifted even in Gunjur. As the Touray gained ground, the Darboe in Gunjur took notice as they were the Alkalo.  It is reported that Arfang Mama Darboe asked the Touray to provide an Alkalo because he was busy fighting to look after the town. Later, Manjang Fing became Alkalo.

Naturally in many Mandinka societies, the king was also the Alkalo of the settlement where he resided. And so after the surrender at Lamin,

“….the Alkaloship (of Gunjur) went to the Tourays after Foday Sillah waged a war against the pagans of Kombo and he took the title of Bankutiyo from the Darboe and Jatta families of Gunjur and Busumbala” (see sarr).

In fact later during his reign, Kombo Sillah Touray was said to have made Brikama his base and renamed the town Darsilameh.

Oral history is a messy business and many a time, difficult to reconcile and my approach is to subject everything we know to tests and retests to see if they hold water.

We can argue for all we can or want but this history is iron clad. I cannot make anyone change his mind because at the centre of this debate is power, land and money in Kombo. Many have dug in and will not yield to evidence. That’s how we locked the poor Alkalo of Babylon because of land and power.

Until then, you are all wished a productive work week in advance and please wash your hands, wear a mask and keep social distancing if possible.

2. A History of the Gambia by JM Gray

5. Historical Dictionary of the Gambia, 4th Edition 2008; by Arnold Hughes and David Perfect

I500 people lay dead at Kombo Sabiji: Why August 4th should be commemorated as a National Day of Mourning

I500 people lay dead at Kombo Sabiji: Why August 4th should be commemorated as a National Day of Mourning ...

I500 people lay dead at Kombo Sabiji: Why August 4th should be commemorated as a National Day of Mourning

UNDER-20 OFF TO MOROCCO CAMPING MONDAY

9 IN RACE FOR NPP BAC TICKET