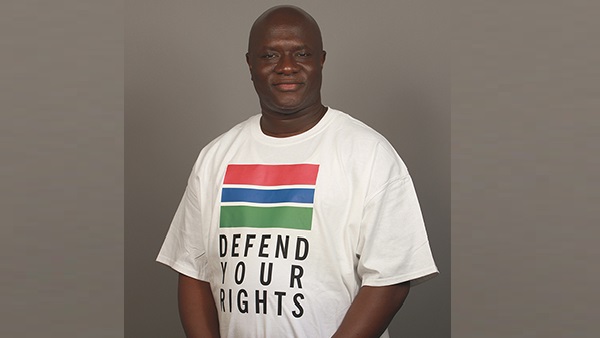 The assumption of power in the continent since the dawn of independence (with lessons to be best drawn from home) created a new phenomenon of struggle for freedom and justice and even the professed New Gambia is not spared. On the credit side, and maybe rather unconsciously or without a choice, the government of The Gambia has without much effort, laid the environment for freedom of expression which is ironically under review today. The review establishes the debit side of the deliberate attempts to undo the credits so recorded in the name of the same government. Not only is this ironically discordant but inflicts upon the citizenry a sense of betrayal to have “The voice of conscience” in the New Gambia, in the person of Mr. Madi Jobarteh arrested and charged for expressing his opinion in a purely human rights matter.

It is no exaggeration to say that Mr Madi Jobarteh is to some extent either by his noble ideas or consistent conduct, the best thing that happens to the democratization process in the so-called New Gambia. Within us, however, and across the political divide of the polite, we have manifested the ability to hate even men of high intellectual aptitude and integrity regardless of our own fallible nature. So, I will not in this piece in any way whatsoever, address some personal hatred that some people strangely, for whatever reason, have clung on against Mr. Jobarteh, because our conversation as a nation should at all instances be guided by ideas and it is inherent for those who wish to share these ideas to do so without personal sentiments.

It is indeed unprecedented and foolish action for a state, after all it has lost and invested in defense of democracy to, in rather a disgraceful and weak manner (in a case it has already lost before it commences) institute a legal trial against a citizen for expressing an opinion clouded with nought but the truth.

In spite of this manifestation of “dictatorial tendencies” and brick-bat by the Executive, the real problem in The Gambia is the high level of political ignorance or immaturity on one hand and “opportunism” on the other. Not strangely enough, the latter which is caused by the failure of the education system has kept the masses in the dark with little or no understanding of the power in their possession neither how to creatively use it. While the former (opportunism) is being practiced by few elites who, for example, understood the position of Mr Jorbateh in our society but chose to be deliberate and continue to tone it down with endless effort to silence noble men like him.

Evident that the majority of our population is kept in ignorance such that, they do not understand the basic dynamics of power and the potentials for the Executive, in such an environment to ‘uncreatively’ abuse it to the detriment of society and its people but for a few, we should not only direct our attention to holding the government accountable but also enlightening the masses of our people to understand the role of the ‘Madi Jobartehs’ in our society.

Mr Jobarteh’s understanding of politics, academic accomplishment, and sophistication in human rights matters and selfless character positions him as an asset to the nation. He is regardless of your opinion, not attracted by the economic or any rewards for his activities because he understands the pathetic graphic picture of our society and is continuously driven by the passion to change it.

He represents the voices of the masses of our people. Mr Jobarteh speaks, demands and questions to hold the powers that be to account not because it is rewarding to him, but he understands the necessity to and dares to represent those who are disadvantaged, don’t understand the worth of their voices, and the reason for the poor status of this country or how to change it.

Comparatively, Mr. Jobarteh is the contrast of any government. It is true that ‘all’ authorities (as a matter of generalization) love to cultivate the culture of or maintain the masses in ignorance, because it is politically gratifying for their continuous survival. Mr. Jobarteh doesn’t dwell upon such an exploitative political machinery. While our politicians revel in regal ostentation, monumental corruption and endless evil, Mr. Jobarteh educates and empowers the masses to stand against such ignoble acts. Consequently, one would understand why the state finds every reason to be discomforted by his activities! Evidently, it is his objectives that are right and relevant for the progress of this nation.

The Greek mythologies, have earlier accurately argued in descriptions of the ‘society’, that every society is composed of three idiots of which are the materialistic class or the bourgeoisie, who unjustly acquire wealth and ‘assume’ to isolate themselves from the society and matter that affect it. They do not care nor pay attention to the plight faced by the said society they are living in. So said the Greeks, the second category of idiots is the tribalists’ . Those who, for their weak intellectual capacity and general inability, do appeal to the sentiments and cultural diversity of cosmopolitan societies as a base to win favors from its section. The third class of idiots in this regard are the “citizens”. These are the people with rational thought and deep understanding of their responsibility as members of a society. They look into the greater good, uphold and respect the probity of the human being and contribute towards the general success of the society.

Of course, Mr Jobarteh belongs to the third category of idiots. He is a citizen and understands what it means to be a genuine member of any society. While I cannot realistically peek into his mind or prognosticate the future and see whether he will change or not, I have long comfortably assured myself that he is a noble citizen, a patriot, the type that the young should look up to if we mean change in our lives time and that of our makeshift society.

Mr Jorbateh represents the agenda of the much-needed re- liberation of the Gambian from the bankrupt system of governance and ceaseless exploitation of its people. He understands the cries of the woman gardener in the remotest hamlet of The Gambia who is not even spared from the exploitation. Thus, the continuous demand for genuine leadership. Most amazingly, he does not represent the much pathetic political groupings in this country.

Mr Jobarteh represents a liberated progressive mind and citizen, who values human life regardless of one’s political affiliation, sexual orientation, imaginary tribe or social stratification. He is as far as the embodiment of a genuine “citizen” is concern, one of the finest one could point to in The Gambia.

The past explains how we got here today, so I do not and no one (except those exploiters) should care when Madi’s fallible nature offends the establishment or the laws designed with the exact intent to suppress the voices of the oppressed! Consider it, for example, as the reactionary effects of the half a century troubled souls.

I know, I cannot amply or exhaustively demonstrate the value of Mr. Jobarteh for what he represents and I have no intention to either but the story is told of many a great man, who dared to be different in strange times in societies that are today considered as liberated and progressive. History is kind to them because they possessed the forethought and genuine intention to institute real change. At first, they were misunderstood only to be celebrated by posterity.

Mr Jobarteh has chosen that right path, that of the people’s fighters! So tell Mr Government, you cannot silence the People’s Fighter! He represents just but us! He is us and we are him! Oh yes I am Madi Jobarteh!
Toney F Mendy is a second-year law student at University of The Gambia.