Yahya Jammeh should swallow his pride and defend himself 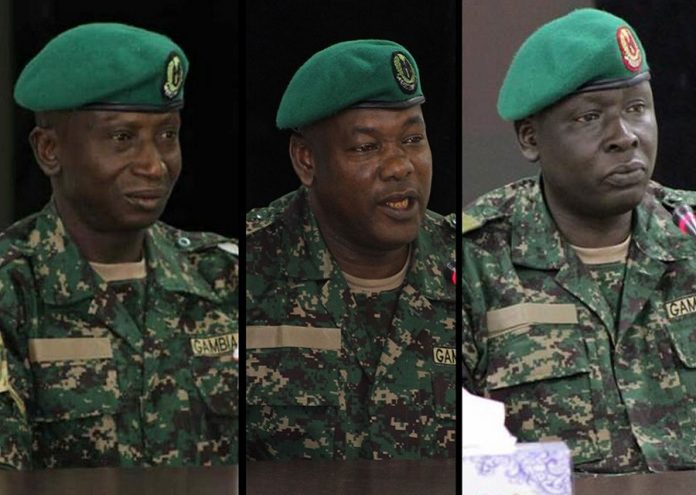 Modou, if you could remember you and I once discussed the disappearance of Haruna Jammeh, Masireh Jammeh, Dawda Nyassi and Bubai Sanyang, your cousin.

I then asked you whether President Jammeh was aware of their disappearance and you told me that he was behind it.

According to revelations at the Truth, Reconciliation and Reparations Commission, Haruna Jammeh, Dawda Nyassi and Masireh Jammeh were murdered by Yahya Jammeh’s junglers on his orders.

You have been vindicated.

If your hands are clean, why paying such a huge amount of money? It has been revealed that the Ghanaian nationals were murdered by Yahya Jammeh’s junglers on his orders and dumped into a well.

You know Baba Jobe was incarcerated at Mile Two Prisons after he was convicted and sentenced by the High Court in Banjul.

He already served his sentence.

Would you not be surprised to hear that Yahya Jammeh’s junglers murdered him in his sick bed by strangulation on his orders?
What about Mamut Ceesay and Ebou Jobe, the Gambian-American nationals? Were we not told that they did not arrive in The Gambia? But testimonies at the Truth, Reconciliation and Reparations Commission revealed that they were also murdered by Yahya Jammeh’s junglers on his orders and buried in his garden at Kanilai.

But on the contrary, they were shot to death by Yahya Jammeh’s junglers on his orders according to revelations at the TRRC and also buried in a well.

Tumani Jallow and Abdoulie Gaye were said to have been murdered by Yahya Jammeh’s junglers on his orders and buried in his garden at Kanilai.

It was alleged that Tumani Jallow was among those who burnt the APRC political bureau at Kanifing.

Don’t you think they should have been taken to court and allow justice to take its course?
According to Yahya Jammeh’s junglers, Sulayman Ndow , Mahawa Cham and Ndure Cham were murdered by them on Jammeh’s orders.

Since they were accused of planning to overthrow Yahya Jammeh’s government, why his government did not resort to the courts?
Modou, you must have read my article which was published by “The Daily News” on the 19th October, 2011, where I stated: “The Minister of Justice, Edward Gomez, is doing injustice to Chief Ebrima Manneh’s family and the entire media fraternity by not revealing where Chief Ebrima Manneh is being detained, yet he does not want anybody to call him Injustice Minister.”

It was Yahya Jammeh who said that Journalist Chief Ebrima Manneh must have died through the back way journey.

But his former Minister of Justice, Edward Gomez, told the nation that Chief Ebrima Manneh was somewhere else.

You can see the contradiction between Yahya Jammeh and his former Minister of Justice. This was why I asked about the true fact of Chief Ebrima Manneh’s case.

Would you not be surprised to hear that Chief Ebrima Manneh was found at Sarreh Ngai Police Station where he was reportedly tortured to death and buried near the police station? For your information, the revelation was made at the TRRC.

As I was covering cases on the 17th December, 2004, at the Kanifing Magistrates’ Court for “The Independent” newspaper, I saw Bakary Samateh, Modou Kanteh, Sarata Jabbi and you walking out of the courtroom with sad faces. You did not speak to me.

You were all writing for “The Point” newspaper at the time.

I wondered what went wrong.

My friend prosecutor, First Class 1748 Mballow, told me after you and Sarata and the others had left that Deyda Hydara had been killed.

I then knew why you left without saying anything to me.

I could not believe my ears. I was really taken by surprise.

I wondered what he had done to be killed like that.

“Dawda, it is better to leave this job,” my friend Mballow advised me.

I told him that I would not stop writing as a journalist, and that no amount of threat would stop me from writing.

This was what I wrote in an article published by “The Daily News” on the 21st December, 2011, “Deyda Hydara was a property of God and had been destroyed by heartless murderers. Let them know that they have offended God and He will one day destroy them.

There is no doubt about that because truth always triumphs in the end. It is just a matter of time.”

It came up with a bogus investigation into his death, ridiculing him.

When “The Point” newspaper asked about who killed Deyda, Yahya Jammeh said we should ask Deyda who killed him.

But why was it that whenever Deyda’s death was mentioned, Yahya Jammeh would feel uneasy? Chinua Achabe wrote in his novel “Things Fall Apart” that old people feel uneasy when dry bones are mentioned in a proverb.

At the TRRC, Malick Jatta, Yahya Jammeh’s jungler, revealed that Alieu Jeng, Tumbul Tamba, Sanna Manjang and him killed Deyda in a drive by shooting on Yahya Jammeh’s orders.

He went on to say that Yahya Jammeh paid them in dollars, and when he converted his share into dalasis, he said he ‘scored’ more than D50,000 as a token in appreciation of the killing of Deyda.

Modou, you once told me that Deyda was your friend, and that he was kind, generous and humble. Now you know the killers of your friend.

All these revelations happened in your absence. If the revelations do not link Yahya Jammeh directly to the killings, why did they happen under his government? These are serious revelations and Yahya Jammeh should swallow his pride and defend himself.

Modou Sanyang, sleep well until you and I sleep together side by side. Rest in peace, my dear friend