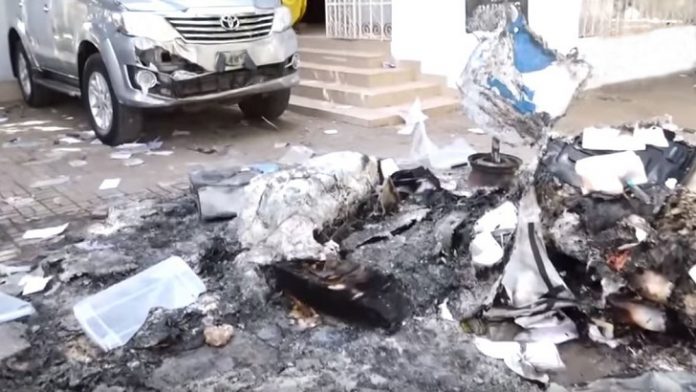 At least 15 people, all believed to be Guinean nationals, have been arrested and detained since Friday as police investigate an attack on the chancery building housing the Embassy of the Republic of Guinea in The Gambia.

The building is located in the Senegambia strip in Kololi.
Two women are among those arrested.

Yesterday, police spokesman ASP Lamin Njie told The Standard: “It looks like a well-coordinated attack. Two women approached the guards at the chancery and said they wanted some documentation and when the unsuspecting guards opened the door for them from inside, a crowd surged into the compound and started vandalising the office. They burnt most, if not all official files and overturned furniture and other facilities before reinforcement was sent to over power them.”

Although the police said they were yet to determine the motive for the attack, observers suggested that it might have to do with the referendum called by President Alpha Condé for yesterday. The referendum has now been postponed for at least a fortnight. Guinean opposition parties have roundly condemned the planned vote describing it as an attempt by Condé to change the constitution to allow him to run for a third term.

Commenting on the attack, ASP Njie explained: “What makes this incident worrying is that it is an attack on a diplomatic post and the police want to assure all diplomats that their premises of work and residences will continue to be safe and secure at all times. If anything, this isolated incident has brought a lesson that the security will take very seriously.”

He said video footage from the scenes showed “a moment of madness” in the building with things being thrown about and people screaming.
A car parked near the chancery building had its glasses smashed. It is not immediately known whether any members of staff were hurt during the attack.