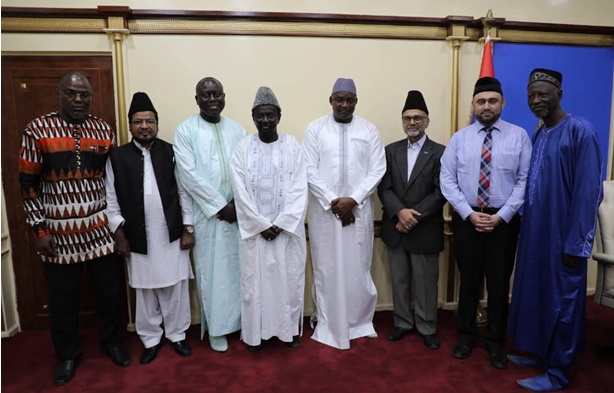 A delegation of the Ahmadiya Muslim Jamaat this week paid a courtesy call on President Adama Barrow, at State House. The delegation was headed by the Emir of The Gambia Jamaat, Baba F Trawalleh and they were accompanied by the minister of Information and Communications Infrastructure, Mr Ebrima Sillah.

Their visit to State House came after the Muslim TV Ahmadiya (MTA) International handed over newly equipped TV studios to the state broadcaster, GRTS. MTA is building its own studios in Banjul and they will soon begin recording programmes from Banjul and broadcasting them on MTA International channels.

President Barrow expressed excitement about the support of the Ahmadiyaa Muslim Jamaat towards the country. He assured them that their participation in the development of the country is embraced by the government, and thanked the Jamaat for the partnership.
“I prayed that we have more investors and development partners like the Jamaat to come and support the development of the country,” President Barrow said.
Emir Baba F Trawalleh explained that the purpose of the visit was a courtesy call on the President after handing over the second studio to GRTS.

“Jamaat is trying within our means, to contribute to all development areas beside health and education. That this country will eventually be a great nation and the people of the country can benefit as far its social aims are concerned,” the Amir said.
The Jamaat is also involved in the agriculture sector. It is working on building an additional new hospital and an international technical training college here in Banjul. He said all of these projects are geared towards complementing the national development goals of the government.

Munir Uddin Shams, managing director of MTA International, expressed delight at the cooperation with GRTS.
“The founder of the Ahmadiya Muslim community has said that he has been sent by Allah for two purposes: to bring people nearer to God and to serve humanity. These are important to us and they are the reason the Ahmadiyaa Muslim has been establishing schools, hospitals in The Gambia and other African countries,” Shams explained.