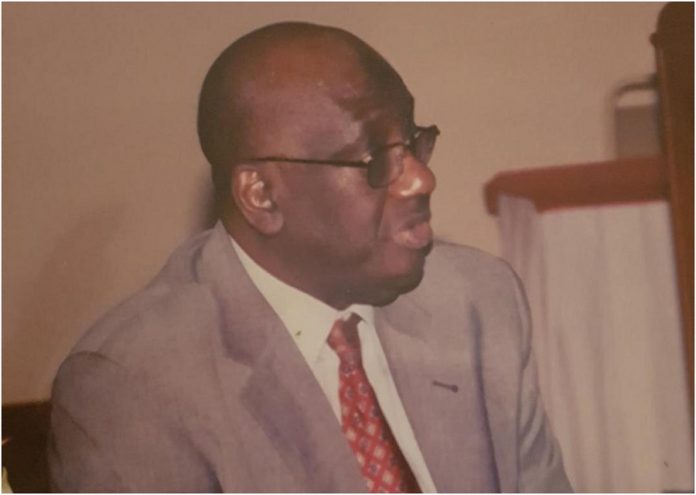 Alhaji Ebou Taal who died at 82, weekend, was a pioneer Gambian diplomat, international civil servant and a historian of the socio-political space called Senegambia.

But it was in his formative years that he must have developed his rare and quintessential diplomatic skills.

Born in Bathurst in 1937, Ambassador Taal attended the elite Methodist Boys’ High School before he became one of the first Gambians to study at Fourah Bay College, University of Sierra Leone, where he earned a degree in Economics and French in 1962.

He spent a few years in the Executive Officer Cadre of the Colonial Civil Service where he cut his administrative teeth under the legendary K.J.W Lane and Humphrey Smith, the last breed of British Civil Servants in The Gambia in the years just before and after independence.

When The Gambia became independent in 1965, Ambassador Taal, Omadi Diarra and B.E Njie were recruited to form the nucleus of our new diplomatic service.

Later, they were joined by Sheikh Jeng, who was to become Jawara’s legendary Director of Protocol from 1970 to 1987.

This was indeed a tiny team but most effective and dedicated. Among them, they ran the Ministry of External Affairs and the diplomatic service from the Quadrangle, under the close supervision of Mr. Lane and from 1967, Eric Christensen.

Taal, Njie and Diarra and Eric had one thing in common: they were Gambian Francophiles, who spoke and loved the language. This proved effective especially in forging formal diplomatic ties with Senghor’s Senegal.

In January 1966, the Gambian High Commission in Dakar was opened with B.E Njie and Omadi as First and Second Secretaries respectively; Ambassador Taal and Eric were left behind to run what was left of the Foreign Office with Sheikh Jeng under the political supervision of Alhaji A.B Njie who was Minister of State under Prime Minister Jawara.

This is why both Professor Arnold Hughes and Dr Omar Touray, who have written extensively on Gambian foreign policy after 1965, marveled at how such a small squad of diplomats were so effective in pitching The Gambia’s tent in the international scene.

For example, not only did we have a working embassy in Dakar, but also in London; we joined the IMF in October 1967 and opened another mission in Lagos in 1971.

It was at this period that Dr. Jabez Langley joined the team, and Ambassador Taal took a furlough to pursue a post graduate degree at the prestigious School for Diplomacy and Protocol in France.

When he returned as the best student in 1972, Ambassador Taal was immediately asked to proceed to Brussels to help open the Gambian mission to be headed by the recently disgraced Sheriff Mustapha Dibba, former Vice President and Minister of Finance, being punished by Jawara for his alleged role in the Butut scandal of September 1972.

Ambassador Taal served under Dibba as First Secretary, and helped to negotiate the first multilateral agreements between The Gambia and the Africa Caribbean Pacific(ACP)-European Economic Community(EEC).

In the autumn of 1974, Jawara recalled Dibba back into his cabinet in an ill-fated attempt at reconciliation.

Taal was promoted to Ambassador of The Gambia to the EEC and the Benelux. There he mentored Ms. Ruth Sowe, the first Gambian woman in the foreign service, and future ambassador.

Ambassador Taal stayed in Brussels until 1977, when as the legendary administrator Eric Christensen was nearing 55 and retirement, Jawara asked him to relinquish the Permanent Secretary of External Affairs portfolio which he occupied concurrently as Secretary General and Secretary to Cabinet.

Ambassador Taal was recalled and asked to take charge of Gambian diplomacy.

His tenure as Permanent Secretary was indeed memorable. He put human rights at the centre of Gambian diplomacy. Under his tenure human rights underpinned all of our diplomatic engagements.

This is why in 1978, at the UN General Assembly he successfully argued for June 16 to be recognized as Soweto Day, later International Children’s Day in memory of the June 1976 massacre of Children in Soweto by the forces of apartheid South Africa.

In the same year, when the same apartheid police killed Steve Biko, the Black Consciousness leader, Ambassador Taal encouraged Jawara to openly condemn the murder of the black activist at the OAU.

The only African leader to do so openly! In 1979, The Gambia again led the pack to condemn Idi Amin’s murder of his own people in Uganda.

In 1980, when Soviet Union invaded Afghanistan, Ambassador Taal encouraged Jawara to break off diplomatic ties with the Soviets, again following the tenets our ethical foreign policy. The list is endless.

What we must add before ending however, is Ambassador Taal’s role in leading The Gambia in formulating the African Charter for Human and Peoples’ Rights in 1980,a great document which apart from the UN Human Rights Charter of 1948, is the most important paper on the protection of basic human rights.

He told me in one of our many chats, that it took him and Jawara more than three years to have the OAU accept the Charter.

Sekou Toure, Guinea’s despotic president, was opposed to it. In 1978, Jawara invited him to Banjul to convince him to buy into the charter.

He was still wishy washy about it. Then Ambassador Taal went to Conakry to meet Toure in his den.

After a whole day of talks, Ambassador Taal won over the despot; in exchange for Toure’s agreement, Taal had to insert the word ‘people’ to read ‘African Charter for Human and Peoples’ Rights’! ‘Toure said rights also mean access to water and food, not only freedom of the press’, he told me.

The Kukoi Coup of July 1981 was another testing moment for the diplomat.

The wholesale destruction of our economy wrought by Kukoi’s adventure almost brought this country to its knees.

But thanks to Jawara’s foreign policy of friendship with the world which Ambassador Taal championed, foreign aid poured into our country in floods. So much aid was coming to Banjul in the summer of 1981 that Jawara decided to appoint Ambassador Taal as Commissioner for External Aid to coordinate the effort of the post Kukoi Relief Fund.

Overnight, he became the busiest Gambian on earth! In a day, he would receive delegations from Basse donating cows to the Relief Fund; receive checks from the German ambassador by midday, and fly off to Tokyo by 4 pm to return in five days to receive cars sent by the French Government. Many powerful people in Jawara’s government and security outfits did not like the fact that so much power and influence was given to one man, Alhaji Ebou Taal. He paid a heavy price for this; the details of which I will not go into.

But I can state that he went onto have a successful tenure at the African Development Bank.

All told, he was a good man. He brought much honour and glory to his country. He was an intellectual, a historian, with a precise knowledge of the pre-colonial states of the Senegambia, and how the current modern states of The Gambia, Senegal, Guinea Bissau, Guinea Conakry could work in harmony for the betterment of their people.

To his family, I convey my condolences and pray for his soul to rest in peace.