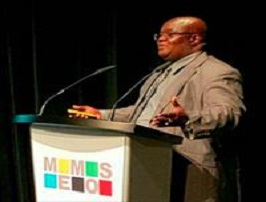 His nomination for the position was confirmed during the recently concluded ANOCA general assembly held in Sal, Cape Verde, on the sidelines of the 1st African Beach Games.

ANOCA is the highest institution of sport in Africa controlling the finance of the continent from Olympic Solidarity budget.

Alh. Abou Dandeh Njie the Ex-President of GNOC was the first Gambian to hold the post of Treasurer of ANOCA.

Mr. Ousman Abou Wadda, who has been serving the GNOC for the past 10 years, was a player of Hawks F.C, Young Africans F.C, a Fifa referee and member of the marketing, referees, and welfare committee of the First Under 17 Football team of the then Gambia Football Association.

He once served as a board and technical committee member of Islamic Solidarity Sport Federation (ISSF) which is based in Jeddah, Saudi Arabia with a membership of 54 Islamic countries.

The management and staff of Gambia National Committee and the entire sporting fraternity wish him a successful tenure in Office.

New Youth and Sports Minister, Bakary Badjie has revealed that his priorities include finalising the youth policy as soon as possible and take it...
Read more
Sports

The official concept Plan of The Brufut Multi-Purpose Center was unveiled Sunday at the Strasser football field. The plan contains drawing and imagery of...
Read more
- Advertisment -