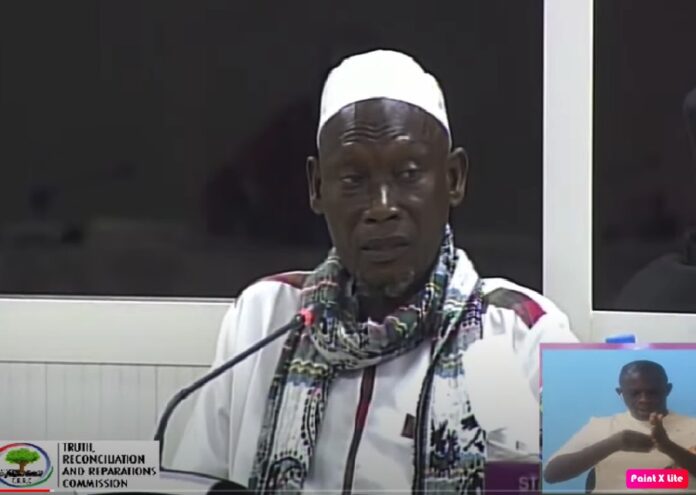 The alkalo of Ghana Town has told the TRRC that he, in consultation with the village council of elders, surrendered two Ghanaian migrants who escaped from the Junglers to the police.

The two Ghanaians—later executed—were in the same group with 8 others who were allegedly shot dead by Junglers and dumped at Ghana Town.

Ismaila Jagne told the truth commission that the two were brought to him by villagers.

He said when they arrived, they asked him whether he knew about any Ghanaian living in the community.

“So when they started speaking in a foreign language, I requested the elders of the village. It was in the presence of the elders that they told us they escaped from some people wearing black uniforms trying to kill them. They told us that they joined a boat from Senegal to The Gambia and that they were supposed to proceed with a bigger boat to Europe but they got lost in Gambian waters,” he testified.

Asked whether he knew the whole number of the migrants, Jagne said the migrants “did not tell me their actual number. They only told me that they were many and that some of them were from Senegal and Nigeria.”

“They also told me they were picked by the police and interrogated. They said they were later taken to another place where some people dressed in black uniforms picked 10 of them to the Brufut forest to kill them. They said the men will take two with them and later come for another and it was during that process that they managed to escape,” he said.

He said when the migrants finished explaining their story, they were given water to bathe and eat.

“We later informed the chairman of the Ghanaian community in The Gambia about them but he said we should give him time to contact the Ghanaian consular officer. But before he arrived, I received a call from the police who wanted to go and verify whether any of those killed were from Ghana Town. They showed me the dead bodies but I couldn’t identify any of them,” he said.

He said when he returned from the police, they decided to surrender the two who came to seek refugee to the police for their safety.