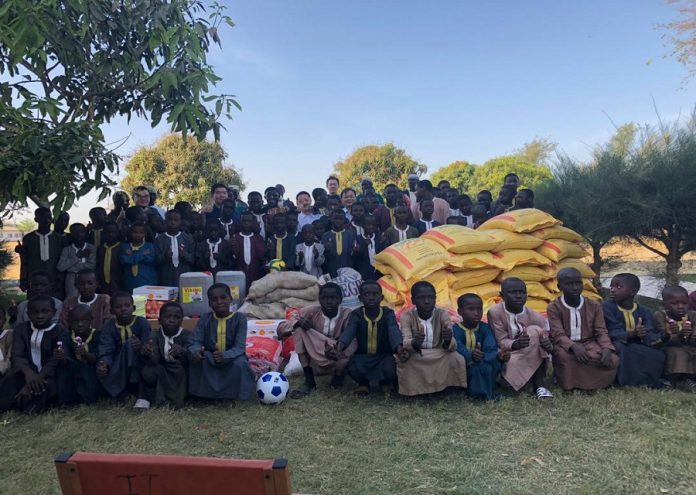 The Ambassador at-Large for South East Asia, Tan Sri Dr Aixinjueluo Yuhao, an official representative of The Gambia Government appointed to exploit business and investment opportunities from that part of the world on Saturday presided over a presentation at the Banjulinding Qur’anic school.

Accompanied by his special envoy to the Gambia, Tan Sri Dr Chuang Chou Wen, the duo donated $2500 worth of feeding items to the school attended by 214 students including orphans and others from many surrounding villages.
The items included bags of rice onion, tomato paste and many other assortments of feeding items and sweets.

Speaking at the ceremony, Dr Yuhao said his mission is to serve the Gambian people to access investment, or any support from South East Asia to The Gambia and the presentation of feeding items to such an institution is very much part of that.
He said he felt gratified to see the smiles on the faces of the children and the management and staff of the school. The Special envoy Chuang Chou Wen expressed similar sentiments adding that he works for every thing to boost Gambia, economically, socially and progressively.

Receiving the food items, Omar Ceesay coordinator of the school said the items would go a long way to alleviate the sometimes pressing needs of the school in terms of feeding.
The Councilor of the Lamin Ward Mbemba Touray representing his counterpart Abi Bangura of the Banjulinding Ward said the presentation is a unique opportunity for the area and thanked the ambassador for the gesture.
Sulayman Badjie, a member of staff said the donated items will help the school in meeting its feeding requirements and thanked the entire delegation and those involved in making it possible. The students who came to join the presentation thanked the donors and prayed for their success in their work. They equally prayed for Kebba K Krubally, the local partner for the group.

Dr Yuhao was joined at the presentation by a team from the West African Ecomomic and Trade Cooperation Association, WAETEC, led by Yap Wee Howe and Miss Mong Qi Qi, the Asia Times Global Media representative both of whom helped in the smooth organization of the event.