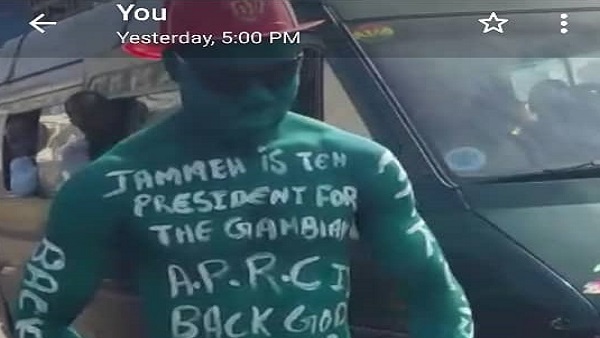 A man, so-far unidentified, who was seen with pro-APRC slogans painted all over his body walking up the streets majestically, has been arrested, police sources confirmed to The Standard.

The hugely built and tall man was seen walking slowly with gloves and dark glasses looking serious and attracting people and traffic with many taking photos of his body painted with slogans reading,
‘APRC is back’ ‘Jammeh is the best president for Gambia’ ‘God bless’.
When news of his arrest spread yesterday, many condemned the police for arresting him saying he was expressing his political freedom of expression.

However police spokesman ASP Lamin Njie said the man was arrested not for political reasons but because of traffic obstruction and idle behavior. The Standard learned that the man was due to be arraigned yesterday but this has not been confirmed.