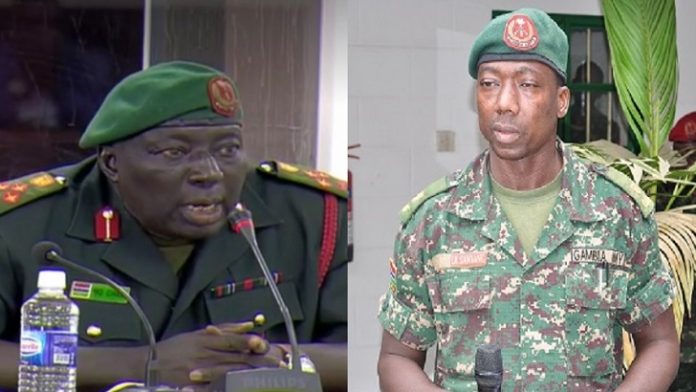 The commander of the Gambia Armed Forces, Mamat O Cham has come under fire for allegedly making threats against people when he appeared on a TV panel aired on GRTS.

However the army public relations officer said the commander’s words were misunderstood.

In the panel hosted by State House press director Amie Bojang-Sissoho, the video of which is obtained by The Standard, Commander Cham said the army will reject attempts from any group who tries to ‘subvert’ the peace and stability of the country.

“Any group or any political association who tries to subvert the peace and stability and due process of achieving political power will come across the Gambia Armed Forces.

This is not a threat, we just want to say that any attempt to remove a constitutional government can lead to retribution,” he said.

Cham further stated that nobody has ‘a right to conspire with another to illegally remove a legally constituted government.

That will become a subversion. So from that perspective, anybody who associates with anybody through whatever means, either in person or using electronic means canvass for anybody to partake in any action which is calculated to subvert the constitutionally elected government is involved in what is called a treasonable action and under that you could be prosecuted and locked up,” Cham said.

Commander Cham said the army has also done an assessment and found out that there is a problem without national cohesion.

“We have also realised that there is intense competition for political power, but I must emphasise that GAF will not recognise any process which is not in line with the constitution,” he added.

However Cham’s comments attracted strong criticism, especially the 3 Years Jotna movement who have said they will demonstrate if President Barrow fails to honour his campaign promise to step down after 3 years
But Army PRO Major Lamin Sanyang said the commander’s remarks were misconstrued and misinterpreted.

“The army has no business in politics; all what Cham did was to take part in sensitization programme that is aimed creating awareness about the need to keep the peace.

He never mentioned the 3 years Jotna.

And in any case 3 years Jotna did not say they want to use illegal means to remove government. All they say is that they will protest which is their right.

As far as the army is concerned the 3 years Jotna thing or matters of peaceful demonstrations are internal security matters that do not fall under the army’s direct purview.

The commander did not say the army will crush any movement,” PRO Sanyang said.