Barra: A coastal community in shock and disbelief 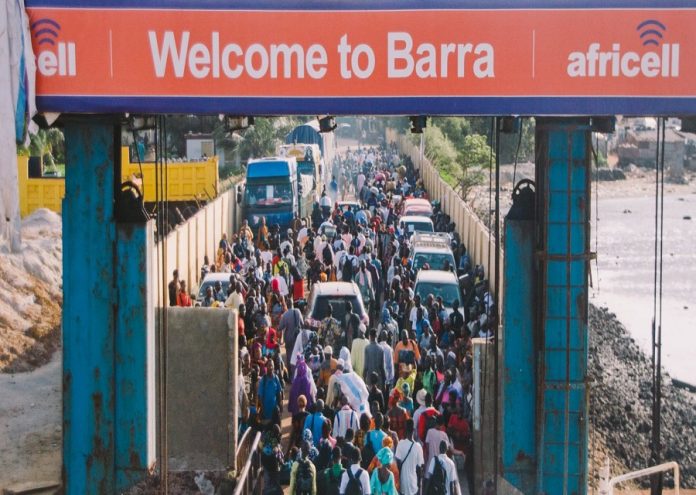 Forty-nine-old Kebba Bojang sat on a sofa in his parlour with his wife Katty Joh. In their house were dozens of mourners. Bojang who lives and works in Kombo returned to Barra to console his wife on the death of their daughter, Jojo.
A few minutes after Bojang took his seat was a 7-year old boy. He is a son of Jojo Bojang, their daughter among the 63 dead at the sea.

“That is Mahmoud Jahateh, daughter of Jojo,” said Katty Joh, Jojo’s mother, pointing to the boy. Barra, like Essau and other satellite villages, is a community in mourning.
Jojo was a waitress at Dreams, a club along Gambia’s busy Senegambia strip, a tourist area. She played a vital part in the upkeep of her family, said Bojang.
Jojo took the boat trip without the knowledge of her parents. And Bojang is angry that the boat left without the notice of the security forces.
There were speculations that the police in Barra knew about the boat leaving and they failed to do something about it.

The dead were also buried in Mauritania and the Government was also late to even issue a statement about the incident.
The Gambian leader Adama Barrow issued a statement about the boat accident but that came 4 days after the incident on December 4.
Meanwhile, no authority from the Government visited the communities that lost dozens of their loved ones.

“I am a father of a dead person but I don’t see any authority who spoke to us… I am very upset,” said Bojang.
Bojang said their community had to send two people to Mauritania to get a clearer picture of what happened.

“The village development chairman sent 2 people to Mauritania on December 5 and when they arrived, they confirmed the death to us and the survivors. Since then, they were the people updating us about the incident,” said Bojang.

A father who lost his best friend
Samba Ceesay, 56, remembers his son with a smile. A seaman working on a Taiwanese-owned trawler fishing in Gambian waters, Ceesay barely stays at home for a week. The last time he saw his son, Yunusa Ceesay, was about 4 months ago.
While in the Senegalese capital, Dakar, on December 4, he got news that his son has died. Yunusa, 20, was among 195 Gambian young people whose boat capsized off the coast of Mauritania, killing 63 people, most of whom were Gambians.

Forty-one of the migrants are still missing. “When I heard the news, it was like the world has come to an end… I would have loved to have died to save him…,” said Ceesay.
As Samba speaks, tears stream the face of Jainaba Touray, his sister from the same mother who lives in Banjul, 7 miles away from Barra. Like Jainaba, Barra is packed with people who have come to pay their condolences to the families who lost their loved ones at sea.

Barra, a community of about 6000 people, has lost at least 15 people, among those already confirmed dead. Its neighbouring Essau town and other satellite communities also lost as much.

Ceesay, a father of seven, arrived in Gambia on December 5, a day after the death of his son has been announced. He sat before his two-bedroom house, on a wooden chair, to talk about his son.

Samba is a seaman, a job he has done for 30 years, but he could barely earn enough for his living.
He lives in a 15 by 10 meters compound fenced with a corrugated iron sheet without a compound door. His building has two separate rooms for him, his wife and 7 kids. The houses are protected by two wooden doors.

His son was a ‘good footballer’ who was in grade 12 at Gambia Senior Secondary School. “I never wanted him to go… but kids are too ambitious these days,” he said.
Samba appears to have a very strong emotional connection to his son. He calls him by his football name Energy, as do Yunusa’s friends. “He is a good footballer,” he said.

His coach in Barra, Sheikh Omar Sowe, agreed, so does Yunusa’s friend, Sheikh Sarr. Sarr is Yunusa’s closest friend and he said he is devastated by his death.
Sarr saw Yunusa off as he walked towards the boat that would take him to his grave. One of our friends bought for him a bottle of mineral water, he recalled. But the boat did not leave from Barra. They set off from a small community nearby called Jinack.
“Yunusa wanted to be a professional footballer. He told me he wanted to play for Barcelona,” he said. Sarr paused and looked down. He and Yunusa, he said, have shared everything. “It is sad,” he said. “He just wanted a change of life so he could help his mother.”

Rising despair
Despite Gambia’s small size, more than 35,000 Gambian migrants arrived in Europe between 2014 and 2018, according to the UN migration agency. Since Gambia’s political change in 2017 which dethroned a dictator Yahya Jammeh, youth migration to Europe through the high seas has taken a downward trend. But recent figures show it is rising again.

A 2018 study by Afrobarometer, a pan-African research network that conducts public attitude survey in Africa, said at least 5 in every 10 Gambian (57%) considered emigrating to another country, largely in search of employment.
According to national statistics, 4 in every 10 Gambian youth are unemployed. But the migration crisis did not consume only the unemployed. Twenty-seven-year-old Sulayman Manjang who also died in the boat wreck was a serving member of the Gambia Fire and Rescue Services.

According to Sheikh Sarr and several sources in Barra, the capsized boat was the third to have left the community. Sarr said the first one which took off about 2 months ago entered Spain while the second was intercepted by Moroccans.
On Friday, barely two days after the deadly boat accident, the Mauritanian authorities intercepted a vessel carrying 190 Gambian migrants also headed for Spain, Gambia’s foreign ministry confirmed on Monday.

The 79 people rescued from the capsized boat and the 190 migrants from the intercepted boat were both returned to Gambia on Monday, confirmed foreign ministry spokesperson Saikou Ceesay. Their return was assisted by International Organisation for Migration.
The boat wreck off Mauritania is the largest known loss of life along the so-called western migration route this year, and the sixth deadliest migrant capsize globally, according to the IOM.

The owner of the boat, one Ousman Bahoum, is at large. In the address of the Gambian leader on December 8, he promised that “culprits will be prosecuted according to law”.
On Tuesday, Gambian police announced the establishment of a task force of investigators from the police, navy and immigration to probe who the smugglers were, how they left the shores of the country and whether the police at Barra were aware of their departure as alleged.
Meanwhile, as the families wait for an investigation, Bahoum has made away with over $130, 000 dollars. Each person, according to Sarr, has paid about $700.