‘Barrow Is Killing GDC In NBR’ 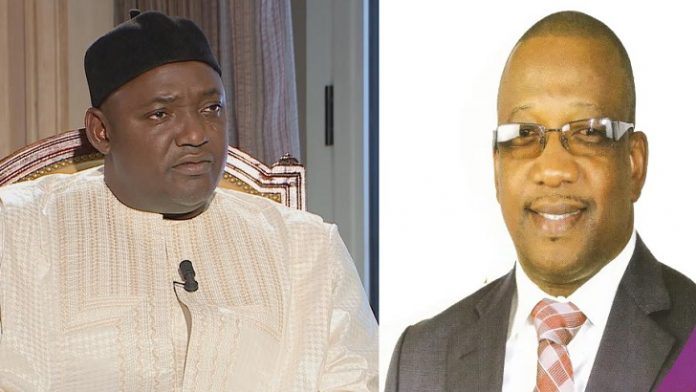 Former Jokadou chairman of the Gambia Democratic Congress, who recently resigned to join President Adama Barrow, has claimed that his former party is dying a natural death in the Niumis.

Ousman Jallow, who claimed he left the GDC with his entire committee members, said they have decided to join President Barrow because “we believe the GDC has no future”.
“I can vehemently tell you that 95% of GDC supporters in Jakadou and the Niumis have joined Barrow and the GDC is dead here. Barrow has done to Mamma Kandeh what he [Kandeh] did to Yahya Jammeh here in 2016,” he told The Standard.

Asked why he left the GDC, Jallow replied: “You know politics is all about interest and that means you need to see yourself in whatsoever you are supporting. We are looking for development and if Barrow can bring us that we will support him. This is why I left the GDC.”

Jallow claimed the GDC vice councilor at Kerewan Area Council, the Councilor of Medina Ward and their chairman in the region, have also resigned and joined Barrow.
He said the GDC made a lot of promises they did not fulfill in the area.

“But I gave the devil its due. The GDC has done tremendously well in other areas and if all the political parties were doing what GDC had done, this country would have changed. But in our case, we believe we deserved even better, hence our switch to Barrow,” he added.
He said their main objective now is to help Barrow in his political ambitions.

Jallow said after completing his switch to Barrow, he is now made secretary general of the Barrow Fan Club in Jokadou, as well as regional youth mobiliser for North Bank Region.
Turning to President Barrow’s prospect of winning a second term, Jallow said: “No political party, not even the UDP can stop the Gambian leader from winning the next presidential election”.

“In the first place, Jallow was only an acting chairman of Jokadou Constituency but he has since been removed from that position. In fact, we had to involve the police to get him to hand over his official GDC motor cycle. In any case, we are not surprised that he left for Barrow because he changes his loyalty like a chameleon. He is even a former PDOIS supporter,” Cham claimed.

He also said GDC remains the strongest party in NBR, with its chairman and prominent members intact and working for the party.

”If anything, the party is growing bigger there. And also, if as Ousman Jallow is claiming Barrow has taken over NBR from GDC, then let the President step down now and test his popularity in a snap election,” Cham challenged.