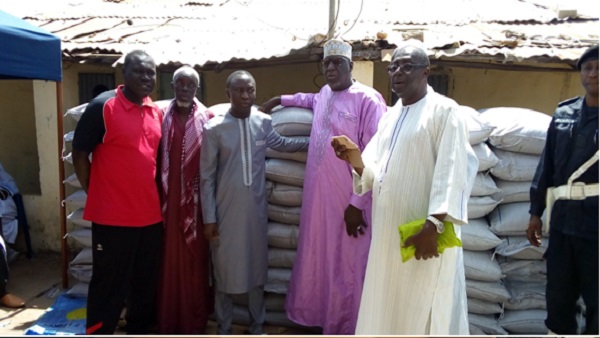 Brikama Association New York Chapter, established in 2015 comprising natives of Brikama resident in the United States, recently donated 80 bags of sugar to Imams within Brikama, West Coast Region.
The gesture, which the association does annually, is part of the association’s continued commitment to give back to their communities more especially during the Holy Month of Ramadan.

Ebrima Cham, the chairman of the Association’s coordinating committee in The Gambia, spoke at length on the significance of the gesture, which he said was well appreciated and “a big relief” to the beneficiaries.
“The members of the association are committed to give back to their communities by supporting the development of the town with regard to health, education, religion, sports among other pertinent issues,” he said.

The support, Cham went on, started in 2017 when the association gave 50 bags of rice to disaster victims of Brikama Nyambai and its surroundings, adding that last year the charity also sponsored the ‘Spelling Bee’ contest comprising lower basic schools within Brikama.
According to him, 80 bags of sugar were also distributed to Imams last year during events marking the observance of the Holy month of Ramadan. “Sugar is a commodity that almost all Muslims need during the month of Ramadan. Therefore, we thought it paramount to support the Imams in the town so that they can also support some needy people within their areas.”

He urged other natives of Brikama who are residing in Europe to join the “laudable initiative” in giving back to communities.
The regional governor of West Coast Region, Bakary Sanyang, dwelled on the importance of supporting Muslims during the month of Ramadan, and commended the donors for their “generousity towards the Muslim Ummah”.

Governor Sanyang added that the distribution was yet another manifestation of the association’s resolve to continue putting smiles on the faces of needy people.
Alhagie Drammeh, co-founder of the association and Imam Lamin Kanteh, praised the charity’s members for the timely initiative.