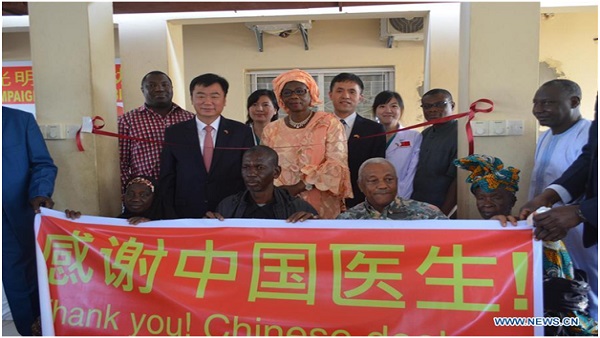 As the doctor gently removed the packing, Bakary Kora couldn’t wait to open his eyes to find back that bright colorful world he had missed for years.
No words could describe Kora’s feelings, the moment he regained clear vision after a cataract surgery.

The Gambian man kept thanking the Chinese doctors who are volunteering to provide free treatment to patients in The Gambia under China’s medical aid program “Bright Journey.”
Kora is one of the 206 patients the ten Chinese doctors scheduled to treat during their 10-day stay in Sheikh Zayed Regional Eye Care Centre in Banjul.
Their mission “Bright Journey,” which kicked off upon their arrival in Banjul in Jan, is the latest leg of an enduring effort by Chinese doctors that have returned clear vision to more than 4,000 cataract patients in Africa over the past four years.
The Gambia has plenty of sunshine and comparatively high prevalence of cataract.
Many cataract patients suffer from blurred vision, even blindness, as the country lacks medical expertise and equipment.

The doctors, who flew over eight time zones from northeast China’s Liaoning Province to reach The Gambia, brought with them state-of-the-art equipment. They donated the equipment to the eye care centre and trained local doctors on how to use them.
In spite of extremely tight schedules, communication turned out to be the greatest challenge to the doctors.
Although English is The Gambia’s official language, most aged patients could only speak their native language.

In the beginning, the doctors kept with them note cards of some of the most frequently used words such as “open eyes”, “close eyes”, “don’t move” in the local language.
“To our surprise, we gradually found ourselves having conversations with patients in their native tone,” said Professor Zhao Jiangyue, a member of the Chinese medical team.
The Chinese doctors are experts from the prestigious Fourth Hospital of China Medical University, based in Shenyang, capital of Liaoning Province.
In addition to carrying out the free-of-charge surgeries, they provided equipment and training to support the development of Sheikh Zayed Regional Eye Care Centre, said Liang Hongjun, leader of the medical team.

Health and medical services is among eight key areas China pledged to expand cooperation with African countries at the 2018 Beijing Summit of the Forum on China-Africa Cooperation.
Since the year 1955, China has sent more than 21,000 medical team doctors to 48 African countries, treating more than 220 million patients.