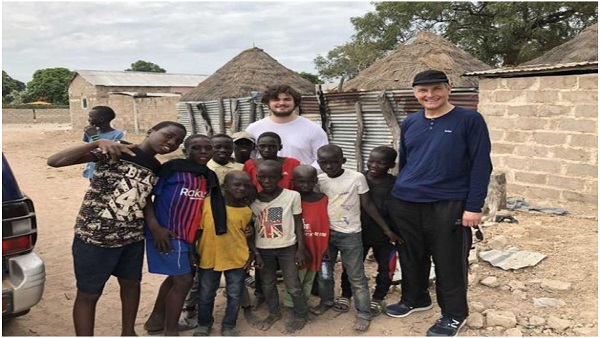 An Archbishop, Jonathan Blake, hosted a colourful display outside his home in Welling, England to raise enough money to have a water pump installed in the Gambian village of Tiaba Nyass, a village which he visited last year.
Now, having reached his target, Mr Blake is excited at sharing the news with Water for Africa, a charity dedicated to providing clean drinking water to villages across the continent.

“It is a wonderful, heartwarming and uplifting expression of the genuine and sincere desire among people to care for others.
“Through the Christmas lights, now 500 children and their families will have access to clean, running water near their homes.
“It will transform their lives, keep them healthy, feed their livestock and irrigate their crops. A small village, thousands of miles away, has been blessed by the humanity and the large hearts of our community,” said Mr Blake.
The archbishop said the inspiration for his fundraiser came after he spent time in Tiaba Nyass with his sons, meeting the community and experiencing first-hand the struggles they face on a daily basis.

“The levels of poverty are unimaginable. Unless you go there, you won’t believe it.
“Out of the 890 people living in the village, 400 of these are children so it’s so important we do this,” he said.
Archbishop Blake intends to return to the village in March, along with Water For Africa, to oversee the installation.