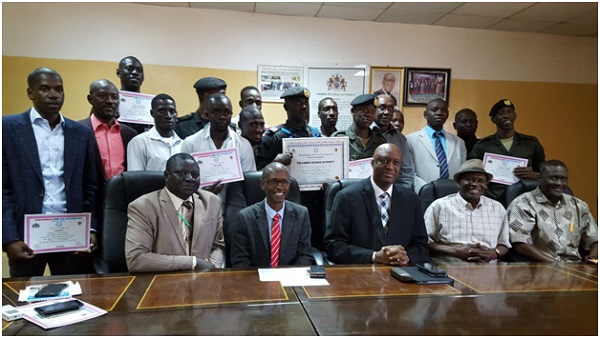 The CEO and initiator of the Senegambia Run for Integration, George Gomez, has paused to recognise companies and institutions who supported and participated in the recently ended novelty run, awarding them certificates of appreciation.
The Gambia Ports Authority, (GPA) Gambia Revenue Authority, (GRA) and the Gambia Police Force (GPF) were some of the institutions that received certificates during the presentation at the Gambia Ports Authority in Banjul.
Mr Gomez said the run was important because it aims to enhance integration between the two countries and promote tourism through sporting events.
He said the idea started some “six years ago but due to the political atmosphere at the time it could not materialise.”
He singled out the GPA for being “very supportive” towards the success of the run.
Gomez said the event was a success as it attracted “so much” attention within a short period.

“It was an event I knew could work if supported,” Gomez stated.
He revealed that henceforth, the Senegambia Run for Integration will be a yearly event.
Also speaking, Alhaji Cherno Ceesay, deputy managing director of GPA, said they remain “committed” to supporting the initiative which seeks to enhance the relationship between the two neighbours.
“Next year, we hope to participate [again]. The GPA is the biggest enterprise in the country and anything having to do with the image building of the country, the GPA sees itself fitting to take part in it”, Ceesay noted.

At the GRA, the officials met Commissioner Yankuba Darboe, who expressed hope that the partnership between his company and officials of the run, improves.
“You want to grow up and succeed in life, you need to have discipline, so I am urging you to always exercise discipline”, the commissioner advised.
He said the run also availed GRA the opportunity to mingle with their Senegalese counterparts.
The last stop for the officials was at the police headquarters in Banjul. There, Demba Sowe, AIG of administration, assured Gomez and his team of the force’s “full support” in attempts to bringing the continent together.