Coaches asked to up their game in west coast region 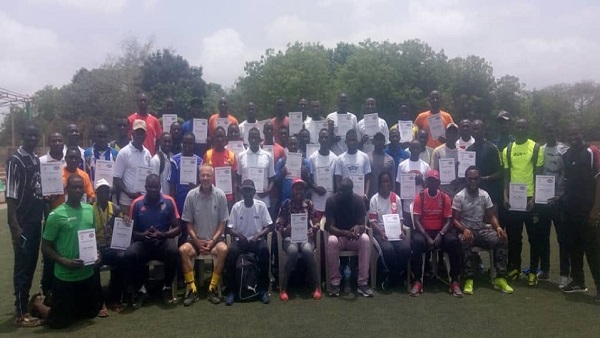 Bakary Bojang, the 1st Vice President of West Coast Regional Football Association WCRFA has disclose that a new standard documentation will be introduced regulate the status of coaches in the region.

Mr Bojang said this at the end of a two week training of coaches attended by 62 coaches in the region.

He further said that one the process is completed only coaches with a minimum of national D License can be qualified to coach in the Regional 3rd division league in the 2019/20 league while a minimum of a basic coaching certificate will be required for coaches in the GFF Nawettan Zones in the region.

He also revealed that all aspiring coaches in these competitions must be registered members with the Regional Football Coaches Association.

The week training course was conducted in partnership with Jan Melchers, a UEFA A license holder and Dutch FA coach instructor.

The coaches were tutored on the “THE DUTCH VISION OF YOUTH SOCCER”.

Among the topics covered were methodologies or styles as well as structuring the practice, variations in warming up, team tactics, concepts in coaching adults/professional or Grassroots
Also speaking at the ceremony the secretary general of The Gambia Football Coaches Association Amat Cham urged the coaches to be always ready to widen their knowledge by taking part training courses including even online ones.

The course instructor Mr Jan Melchers urged the trainees to implement what they’ve gained during the training.

Other speakers include, Yahya Manneh general secretary of WCRFCA among others.