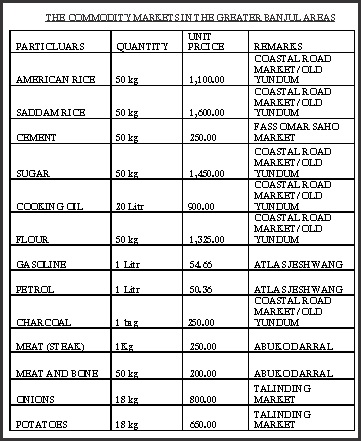 Good Morning Gambia and welcome to MONEY & MARKETS, a Column we wish to stage each week here on the STANDARD NEWSPAPER.
Please keep reading and keep following. Today the currency outlook is bleak with the Dalasi making no gains in trading against international currencies. A lot has been attributed among others as amplified by the Director of Finance and Economic Affairs at the Ministry of Finance Mr. Jobe, last week. The Gambia’s as a country is making very little in terms of exports and selling products, produces and services as Made-In-The Gambia. He further dilated into the fact that SOEs meaning the State Owned Enterprises are not equally making any dividends to support Government in its drive to reinvest locally and bring about some much needed reduction to basic commodities. We import virtually all we eat and need he posited. Apart from the foreign remittances that make inroads into the country and the slowly creeping in of Foreign Direct Investment (FDIs), we struggled as a country to attract and earn foreign currencies. According to sources and news hitting our stands by the Ministry of Tourism that we have witnessed a very good Tourism Season and one of the best in our country’s history but the impact in strengthening the Dalasi and reduction in the cost of living is still not felt in any significant way. Therefore, the cost of leaving will continue to be high for the average Gambia and no matter how much money is added to pay cheques we will still struggle. Recently the Government of Adam Barrow increased by 50% all the salaries of Civil servants which is a good move but their circumstances have not greatly improved. The level of inflation in the Country is also not working to our advantage to combating the high cost of living. I am of the view that government will employ other mechanisms to combating the high cost of living and others with a drive to stabilizing the Dalasi further. We are very encourage with change of personnel at the Ministry of Finance and we hope in the weeks and months ahead there will sound government policies and market strategies that will bring down the cost of basic food stuff and others and ultimately the cost of living in the country.

Regional markets
Ndungu Kebbeh ‘Lumo’ and ‘Daral’
This week the lumo at of Ndungu Kebbeh which is situated in Lower Nuimi District in NBR is a regional centre of commerce for people of the North Bank and the Gambia as a whole. Business was as usual, a bit slow as trade season finances begin to ebb! However, the money traffic within the ‘Darral’ section of the ‘lumo’ was a bit impressive as the demand for meant is always there. This is the time of the year when ‘Gamo’ and weddings are on high observations and it goes with cattle, goat and sheep must-buys. Prices of meat and bone and steak are a D25.00 cheaper in all categories compared to the Greater Banjul Areas. There is good money changing hands within the ‘darral’ which runs into hundreds of thousand Gambian Dalasi each ‘lumo’ day. The cost of livestock is always cheaper here that in the ‘Kombos’.

Entrepreneur quotes
Of the week
“Things may come to those who wait, but only the things left by those who hustle.”
By- Abraham Lincoln

“Either you run the day, or the day runs you.”
By- Jim Rohn

“A year from now you will wish you had started today.”
By- Karen Lamb

“It’s not about ideas. It’s about making ideas happen.”
By- Scott Belsky, Behance

Make A Stand: “Stick with it, even on the bad days.”
By- Vivienne Harr

— CNBC’s Tom DiChristopher and Reuters contributed to this report.