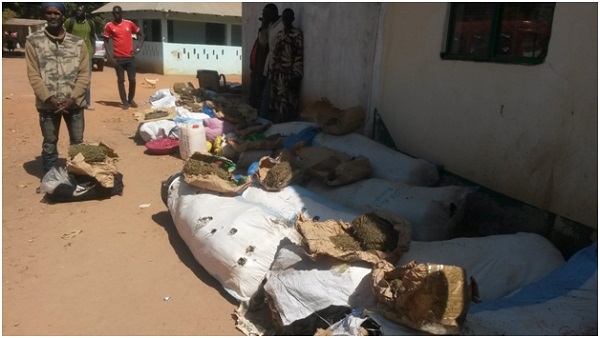 Mawlud Faal, the commissioner of Drug Law Enforcement Agency of the West Coast Region said the agency has recently intercepted more than half a ton of cannabis.
The seizure happened in the West and North Bank Regions between the period December 2018 to January 2019.
In an interview with journalists Wednesday, the commissioner said the apprehension was part of their operational activities.
“…As far as DLEAG is concerned, we will [continue the] fight against illicit drugs in The Gambia. The security [sectors] will work hand in glove in all the regions in order to see The Gambia become a nation free [state].”

Explicating how some of these arrests were made, the commissioner went on: “In December 2018, our officers at Sibanor station received an information that there are some suspects that were seen in the bush carrying some bags, which they suspected contain some cannabis. Acting on that information, officers went to the scene around Tampoto bush, (Foni) where they found six bags of cannabis lying. The suspects were no were to be seen. The illicit drug was later taken to the station and upon arrival was counted. It was 172 big bundles of suspected cannabis which weighs 167kg, 900grams.”
He said another interception happened in Old Yundum.
“An officer attached in Brikama together with PIU officers mounted the check point along the Trans-Gambia highway in Kabafita. The officers saw a vehicle diverging the check point.
They approached and saw a gentle man carrying a bag. They confronted him. The suspect wanted to run, but the officer attempted to arrest him and there was a push and pull between them, until eventually he [the suspect] picked a stone and assaulted the officer on the head. He sustained serious injuries. Reinforcements were sent to the scene that’s how the suspect was arrested.”
He said another arrest happened in Farafenni after reports that some suspected cannabis dealers were seen around the bush in Baddidu Die.
He said the suspects were three in number including two Senegalese nationals.
Faal said theirs is a tough and “risky” job.
“We go sometimes and lay in the bushes with nothing, when suspects are mostly armed.”
Fall appealed for greater cooperation from the public.
“This operation needs collective efforts. The security cannot do it without the help of the public.”
Commissioner of operations, Yusupha Jatta, said attacks on officers is becoming a habit now. He called for immediate end to that.
“Our officers get seriously assaulted. This is because these suspects are more armed than our officers.
He called on the government to give them greater support.
He appealed to young people to shun drug use, telling them “The Gambia cannot develop in the absence of youths”.