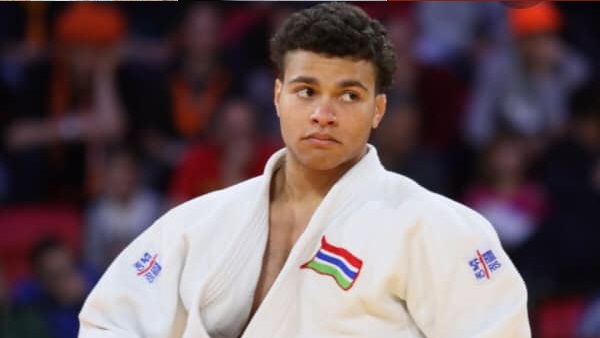 Gambian Judo sensation Faye Njie made a strong showing over the weekend finishing 32nd in an Olympic qualifying fight in Paris, France.
This is the first round of the Tokyo 2020 qualifiers and the Gambian came out 32 out of 73 fighters from 53 countries.

In the first fight of this round, Faye faced a Cuban fighter a three times Pan American champion and an Olympian from Rio de Janeiro.
“The fight was very tight but luckily I won it by penalties just few seconds before the end,” Njie commented.

In the second encounter of the round the Gambian met a Turkish fighter currently ranked 10th in the world.
According to Njie, the match was even at the beginning with both of them not scoring anything but unfortunately a minute before the end, the Turkish was able to get a 10 points throw which finished the fight.

“These two results gave me very precious points towards my qualification and also strengthened my position holding the continental quota spot. Next weekend I will defend my British University Championship title and week after that I will have another qualifying tournament in Düsseldorf Njie,” told the GNOC media.