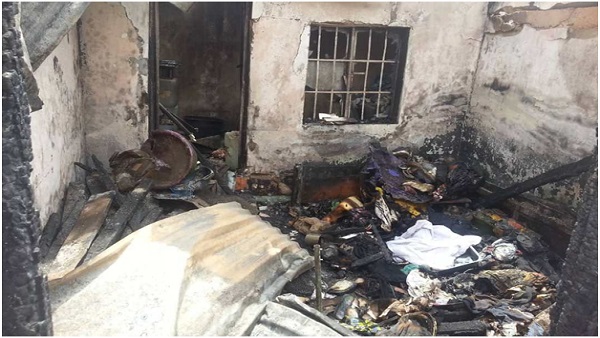 A calamitous fire in Bakau last week ravaged a line house of five in a local compound called Sillah Kunda, leaving the occupants to rue over charred remains.
The fire was destructive and many valuables were incinerated, although no life was lost, residents told The Standard
The fire broke out at 3:00am and the cause of the “aggressive fire” remains so far a mystery.

Tenant Christopher Colley, 28, said he was still asleep when the fire started.
He told The Standard he attempted to salvage some belongings but the fire was “too big”.
“I lost a laptop, money, radio, foam, national documents, a mobile phone and a lot more,” he tearfully explained.
Arokey Jawo, also a tenant, said the fire claimed all her belongings and other valuable assets.

A sorry-looking Arokey said she is now seeking for any help to put her life back together.
Ebrima Jawo, Arokey’s father, said the loss is hard to take, however, he returned gratitude to God for saving lives.
He also called on the government and individuals to come to their aid in these trying times.
Landlord Lamin Sillah sympathised with the tenants, and said he was “grateful to the neighbours who woke up from their sleep at that hour of the night to sacrifice and help put off the aggressive fire, most especially the youths”.