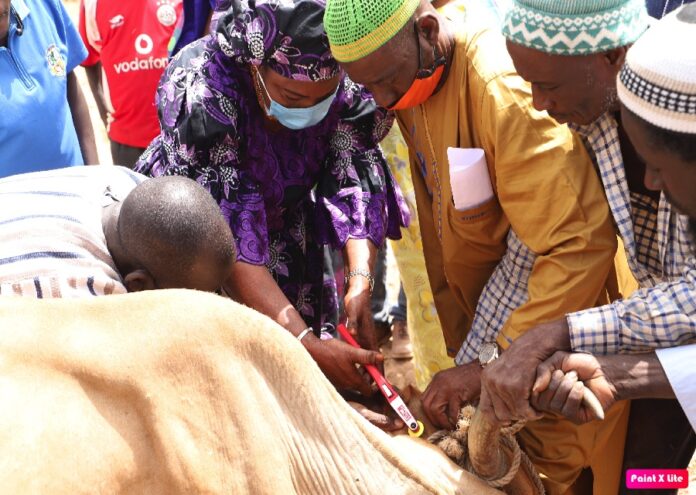 Cattle rustling is a major problem that many livestock owners and herders struggle to contain. The menace has often caused substantial economic losses, and cattle owners often take personal security measures to protect their cattle from theft. In The Gambia, branding is a common security method used by cattle owners to provide identification as well as security for their cattle. Despite these efforts, livestock owners remain vulnerable to theft, loss of their cattle and other livestock-related conflicts”.

The Food and Agricultural Organization (FAO), in partnership with the Department of Livestock Services (DLS), launched the first-ever cattle tagging exercise in The Gambia to address these problems. The initiative is part of FAO activities under the project “Addressing Conflict over Land and Natural Resources (LNR) in The Gambia” through funding from the UN Peacebuilding Fund.

In a ceremony held in Ndemban village, Foni Berefet District, West Coast Region, the Minister of Agriculture, Amie Fabureh, launched the cattle tagging campaign and did the first tagging.

Speaking at the ceremony, Minister Fabureh lauded the initiative, noting that the livestock identification system will benefit the sub-sector significantly. Prevention of theft, recording breeding performance, management, proof of ownership, and in some cases, financial assistance are some of the benefits the identification tags she mentioned.

“Traceability is the basis of any security system for food safety and epidemiological surveillance for animal diseases. For this reason, there is a growing demand for the identification of livestock and livestock products from the point of origin to the point of consumption,” Fabureh said. The Minister commended the project for providing two cattle drinking facilities in the West Coast Region and South of the Central River Region.

Mustapha Ceesay, Assistant FAO Representative and Head of Programmes, represented the FAO Country Representative Ms. Moshibudi Rampedi at the ceremony. In his statement, Ceesay said that the project initiated the livestock identification and traceability systems because it found that the practice successfully reduced theft and resolved livestock-related conflicts in South and Eastern Africa. He highlighted that the Gambia Cattle Identification and Traceability Systems (GCITS) is a pilot project that will introduce the first appropriate livestock identification and traceability system. Dr Ceesay added that to ensure the project’s success and sustainability, FAO hired a consultant who assessed existing systems and came up with recommendations.  The consultant also conducted training for 90 Livestock Assistants, Regional Directors, and staff on the identification system and provided technical support in setting up the database and the cattle tags’ manufacturing and information requirements.

Other speakers at the ceremony included Abdou Ceesay, Director of DLS and Ebrima Jallow, president of the National Livestock Owners Association (NaLOA). Both expressed delight at the launch of the project.