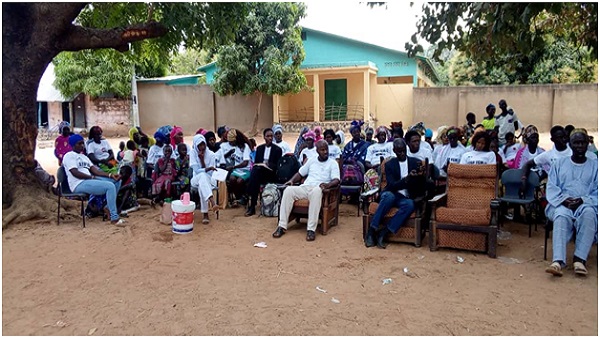 A public meeting on ending FGM/C and child marriage was staged in Baddibu Illiassa in the north of The Gambia.
Organised by the Nova Scotia Gambia Association, NSGA it brought together community leaders and people and friends of Illiassa.
The meeting follows a similar one organised in Foni recently, as the campaign on completely eradicating FGM/C and child marriage intensifies. The government placed a ban on FGM in 2015, but activists noted the age-old practice is still a “serious challenge in Gambia.”

Nova-Scotia hopes to educate and highlight the dangers of these issues to put a stop to it.
“I know the issues we are addressing are sensitive as they are deeply attributed to culture and religion,” Haruna AI Jallow, project coordinator of NSGA said at the meeting.
As such, he noted how important it is to take the right approach and follow available protocols in communities in discussing such sensitive issues.
“Otherwise, there could be stiff resistance here and there. I challenge you not to relent or be discouraged, change is a gradual process. We cannot end centuries-long practice overnight,” he stated.

He said to make FGM and child marriage a thing of the past, all sectors of government, including religious and traditional leaders and the CSOs need to join hands.
“Let us use all available platforms to share valuable information as this will save someone’s life,” he advised.
The Chief of Illiassa Ebrima Jammeh, commended the idea, and and reminded that it was not the first time Illiassa holds such discussions.