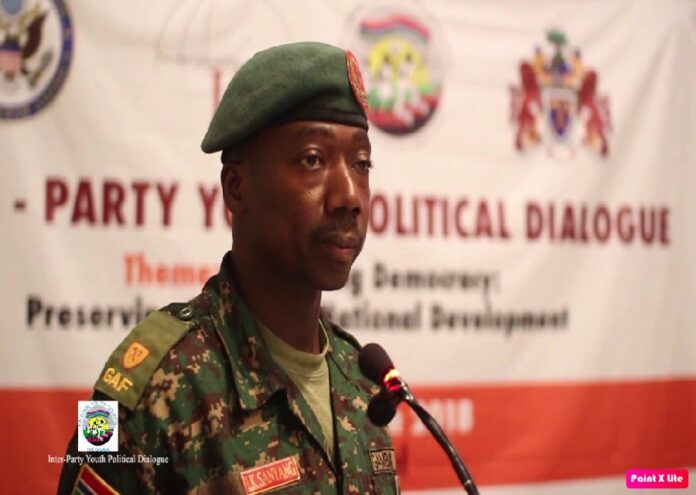 The Gambia Armed Forces is currently struggling with bloated ranks, one of many problems inherited from the 22 years of the past government’s unbridled Jammeh interference in the affairs of the country’s armed forces.

The army said it has now added two more infantry battalions to the previous three battalions as a way of dealing with the complex problem of having many ranks in a particular battalion.

Armed forces spokesman Major Lamin Sanyang added that “natural attrition, capacity enrichment and promotional exams” are other measures that the army has now embraced to deal with bloated ranks.

Speaking to The Standard, Major Lamin K Sanyang, GAF director of public relations and media, said the bloating of ranks in the army is a delicate problem inherited from the previous government, adding that the force is “treading carefully” to find durable solutions to the predicament.

“It is a problem that we have inherited and we are working tirelessly to deal with it as the case may be because these are Gambians that have opted to join the armed forces to serve their country. So one has to be careful about how you go about the issues,” Major Sanyang intimated.

“So in an attempt to correct these [bloated ranks], we’ve created two battalions that would allow us post people there and at least reduce having that problem of having many ranks in one battalion,” he said.

Asked whether the army would also consider demotions or stripping undeserving officers and soldiers off their ranks, Major Sanyang explained: “Well, there are implications in most of these actions that people expect when it comes to dealing with these bloated ranks and even the numbers in the armed forces but we have taken other measures that have little implications to national security. For example, if you are talking of demoting people or stripping them off their ranks you are creating a room for resentment and discontentment within the ranks and this could have far-reaching implications on national security. The alternative there is we have opted for what you call, natural attrition to enable us deal with the numbers,’’ he said.

Major Sanyang further intimated that while they are not against downsizing there are implications when you downsize because you have to create a soft-landing for those that you are downsizing for their life after service. “Otherwise you send them out in the street and there is nothing to do and they become a liability again to the state and a threat to national security. That’s why the armed forces is ready for security sector reform,” he said.

Meanwhile, The Standard has learned that the army has placed a moratorium on recruitment for three years and those retired too are not replaced.