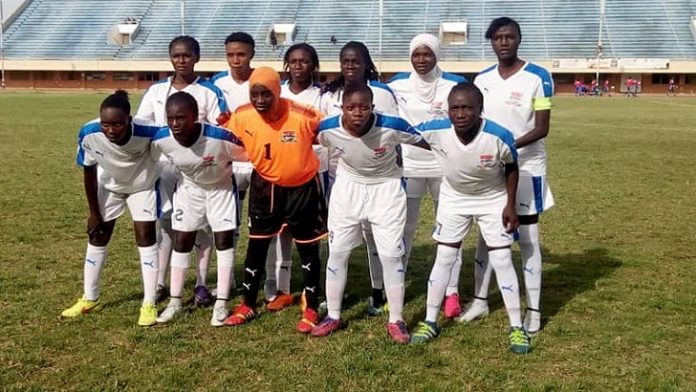 The Gambia Women’s Scorpions were on Sunday held to a 1-1 draw by touring Guinea Bissau national team in first of two friendly matches planned between them.

The Gambia took the lead through Adama Tamba just before the break.

Bissau came from behind to equal the score through Tchalda Man who took well taken hit after a protracted scramble in the penalty area.

Bissau renewed their hopes deep into added time when Tchalda Man came close to scoring a second goal but her effort was parried away by keeper Mariama Ceesay.

After the game Sidico Queita, head coach for Bissau said it was a good test for his side.

” It was a test and I think we put up a respectable performance.

The Gambian team have some good players but we managed to match them and come Tuesday it will be a different game”, he warned.

Gambia coach Mariama Bom Sowe said her team was unlucky and were wasteful in front of goal. “We created lot of chances but we failed to score.

I am also not satisfied with the performance of the team tonight but expect a better performance from us on Tuesday”, she said.

The two teams will face off tonight at 8pm at the Independence Stadium.

What sports means to me

By Baboucarr Camara SEOUL –It's 3:45a.m. here; most people are in bed. It's nine hours behind in Gambia, precisely 6:45p.m. Instead of getting enough sleep...
Read more
- Advertisment -