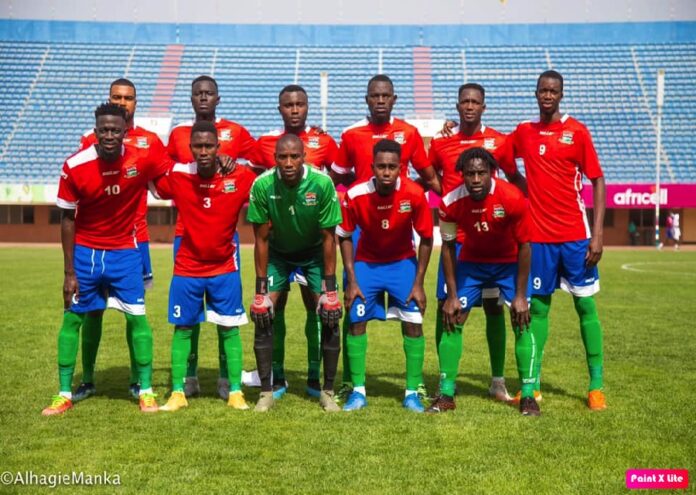 After more than 50 years of waiting, The Gambia made history last night reaching the Africa Cup of Nations for the first time, and with a match to spare. The country’s footballers secured one of the two available spots in Group D after beating Angola 1-0 in an empty Independence Stadium in Bakau.

Assan Ceesay latched on to a rebound to drill in the only goal after Steve Trawalley set up Abdoulie Jallow with a defense splitting pass in the 62nd minute. That was enough for The Gambia’s part in the historic journey confirmed by Gabon’s 3-0 spanking of DR Congo in Libreville. Both Gabon and Gambia have a game to play on March 29 when the fixtures would be completed but the two sides have so far secured an unassailable 10 points lead ahead of Congo which can only have 9 points at best, while Angola had since been eliminated.

The final whistle was greeted by emotional scenes in the stadium with Gambian players hugging and celebrating a lifetime achievement for the country. Soon after, a spontaneous outburst of jubilation rocked the Greater Banjul Area with cars blaring horns as groups gathered to bask in the feeling. The president of the Republic Adama Barrow immediately called the national broadcaster’s commentary team in the stadium to congratulate the nation and the players for the historic achievement. He said as a great fan of football, the victory is a personal pleasant surprise for himself.  He promised that his government will continue to support the team and sports in the country.

As news of the historic feat went around, Gambians around the globe took to social media to pour congratulations and celebrate the country’s historic victory.

“The feeling is indescribable! If you can describe it, then you are not as high as I am, and the intensity of what you feel is not as overwhelming as what I feel. No, I am not talking about weed or crack, I mean the win and the qualification! Congratulations to the Scorpions”, commented Alagie Saidy-Barrow from Europe.

Many fans congratulated the efforts of the Gambia government and the Gambia Football Federation for working hard to prepare and motivate the players. Others dedicated the landmark event to the fallen and living legends of Gambian football such as the late Biri-Biri who died last year.  A jubilant coach Tom Saintfiet commented: ”I am a very proud coach after this achievement by Gambia. I love The Gambia”.

As the evening wore on and the significance of the event sank among the population, more people staged their own corner-side celebrations praying for the footballers with good luck in Cameroon in January.

A senior government official told The Standard that a major achievement like this is rare and it will be given a fitting treatment in the not-too-distant future.