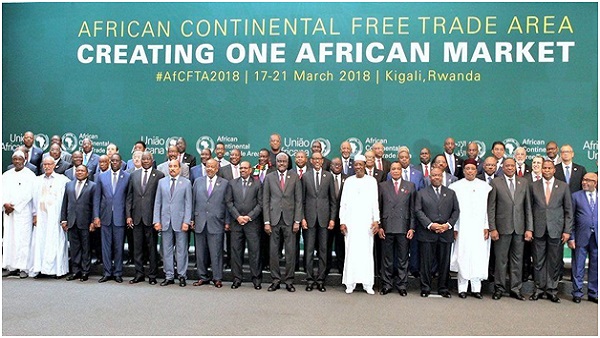 Gambian lawmakers unanimously considered and ratified the African Continental Free Trade Area agreement, AfCFTA.
AfCFTA is a planned free trade area, outlined in the African Continental Free Trade Agreement among 49 of the 55 African Union nations. If all members ratify the free-trade area, it will be the largest in the world in terms of participating countries since the formation of the World Trade Organisation.

The agreement was brokered by the African Union (AU) and was signed on by 44 of its 55 member states in Kigali, Rwanda on March 21, 2018.
The continental free trade area is determined to take the necessary measures for reducing the cost of doing business and creating a conducive environment for private sector development, thereby boosting intra-African trade.
Presenting the report before deputies Monday, trade and regional integration minister Lamin Jobe, said the free trade also seeks to position the African continent to better explore its numerous trade and investment opportunities and contribute positively towards the structural transformation of African economists.

He said AfCFTA is one of the flagship projects of the Agenda 2063 of the African Union.
“The main objective is to achieve a comprehensive and mutually beneficial trade agreement among members states of African Union which will realise the potential to expand and accelerate the growing diversification and dynamism of intra-African trade and aims to increase trade among the African countries by 50% by 2022.”
He said the Rwanda treaty also includes three protocols on trade in goods, protocol on trade in services and protocol on rules and procedure on the settlement of disputes.
He said the during the course of the negotiations, a set of modalities for liberalisation of trade in goods have been agreed and adopted by the Assembly. This would guide the implementation of the trade, he said.

“The level of ambition for trade liberalisation is agreed at 90 percent. This means in a given period 90 percent of trade amongst states parties must be liberalise while the remaining 10 percent would be set aside for sensitive and exclusion list,” the minister noted.
However, he said although the implementation of the idea offers “good deal of opportunities” for The Gambia, it also comes with challenges.
“… Goods coming from other states would no longer attract duty and that may impact negatively on the country”.

Mr Jobe said the free trade may also pose “serious challenges” to the domestic industries through competition, especially if they could not adjust quickly to the new environment which may have ramifications for industrialisation and employment.
“However, the free trade offers enormous opportunities not only at economic level but also at political level as trade is a key instrument of integration of economic and social development.”

As a continental trade instrument, and with strong instrument of legal redress, Jobe said the ACfTA provides The Gambia with opportunities to address intermitted difficulties in trade relations with its only neighbour.
“It also offers Gambia with an enlarge market of over 1.2 billion consumers. This means that the country’s market population is no longer limited at its 2 million people but that of the continent,” he noted.

NAM for Kantora, Billay G Tunkara, seconded the motion, and said the trade agreement does not only create employment opportunities for Gambians but also gives consumers varieties of choice within the continent.