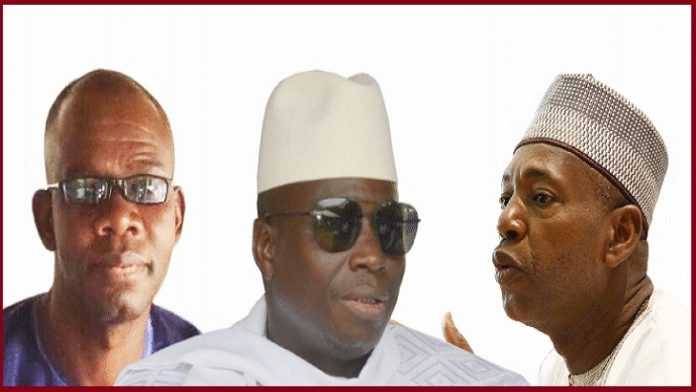 Ousman ‘Rambo’ Jatta, the deputy party leader of the opposition APRC, has said that contrary to claims by Hamat Bah of NRP, the current Minister of Tourism, it was in fact Mr Bah himself who ‘requested’ for Jammeh to appoint him Vice President during the political impasse.

“Hamat Bah had already betrayed the Coalition 2016 because he came to President Jammeh to look for a position. He wanted Jammeh to appoint him Vice President; I was working at State House at the time. So Mr Bah did not tell the whole truth about this matter and if he insists on this, I have documents that I will publish for the whole world to see that these Coalition people are not serious,” he told party supporters at the Brikama rally saturday.

Hamat Bah had reportedly told his NRP congress in Mansakonko that Jammeh had offered him the position of VP during the political impasse but he rejected the offer because he [Jammeh] had destroyed all his investments and has sent him to jail.
But according to Rambo Jatta, Minister Bah’s claims were inconsistent with the facts.
“Hamat Bah came on his own to surrender himself to Jammeh but he was not given away. So it was very disappointing to hear him tell a different story. He is a disgrace to the Gambian people. APRC’s silence does not mean we are scared,” he asserted.

Journalists
Meanwhile, Mr Jatta also took time to chastise Gambian journalists, saying he is very disappointed with them because there are things happening in the country journalists are not investigating.
“If we are calling them to give them information and they are siting on that information, then I am beginning to believe Barrow’s claims that some journalists ask him for money for them to write good things about him,” Rambo said.

He continued: “Gambian journalists’ biggest enemy today is the APRC but they should realise that there was yesterday before today. We used to have lot of journalists because they were all looking for asylum but now they keep carrying their cameras and writing on their papers, yet they will not succeed.”
Rambo Jatta said he was very shocked to see that during the inauguration of the bridge, the Senegalese flag was above the Gambian flag in Gambian territory.
“That is madness. Babili Mansa would not have accepted that.”

TRRC
Meanwhile, the APRC deputy spokesperson, Dodou Jah alleged that the only way the TRRC can establish anything against Jammeh will be to pay witnesses to lie against him. He said the Coalition government is making a big mistake by continuously keeping Jammeh in exile, adding “the more Jammeh stays in Equatorial Guinea the bigger the APRC will grow”.
The APRC women’s mobiliser, Isatou Jiffanga Jarju called on President Barrow to quickly facilitate the return of Jammeh as Jammeh did for former President Jawara.
She called on the Gambian leader to stop maltreating the APRC. “President Barrow should not allow people to destroy him because the same people who were behind him when he won the presidential election are now questioning his birth and tribe. There are people in his government who are ready to do anything for him to fail,” she added.