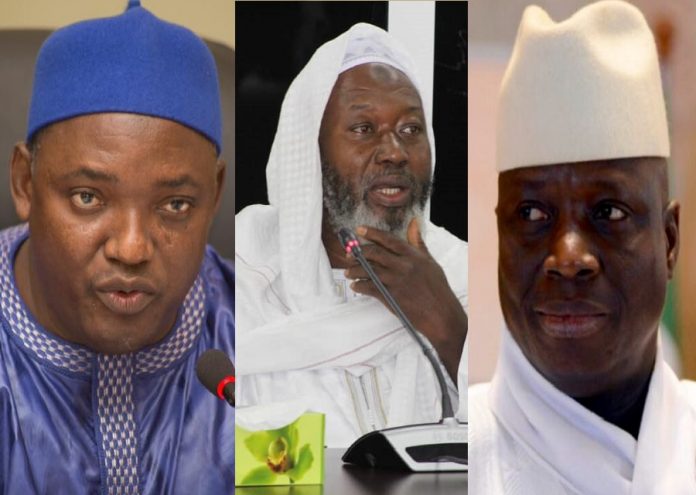 Imam Abdoulie Fatty has urged the APRC leadership to engage President Adama Barrow to seek the return of former president, Yahya Jammeh, to The Gambia.
“I want to urge you to stop organising protests to request for Jammeh’s return. [Instead] you should open dialogue with President Barrow to see how best Jammeh could return to the country,” he told an APRC delegation led by Fabakary Tombong Jatta which paid a courtesy call on him at his Bakoteh residence yesterday.

The former imam of State House Mosque said Jammeh had extended the same benevolence to first president Alhaji Dawda Jawara. But he lamented that “unfortunately, our people today do not see the past”.

In justifying his call for the former president’s return, the imam said he believed the TRRC reconciliation process should not apply to only a select few. “It should be for the whole country including Jammeh because everything in this world has an end,” he posited. The imam said Gambians should stop blaming Jammeh for all and sundry.

“When he came, the majority of us were in love with him until his last days. Now that his time has ended, we should think of reconciliation. Unfortunately, the way I am seeing things, I don’t think we will be able to bring this country together again. If the government had consulted us [religious leaders] for advice before establishing the TRRC, we would have given them proper advice.

In shar’iah, if you kill someone deliberately, only those who should inherit the deceased have the power to decide whether the killer should also be killed. And even if they are ten in number and one of them happen to forgive, he should not be killed. The person will be asked to compensate for the dead. This is how reconciliation is done in Islam because if you want to bring people to narrate how they killed people, that will just escalate tension in this country,” the imam said.

Imam Fatty averred that the APRC has done “very good things that nobody can dispute” and he prayed that the former president emerges from his current difficulties.
He said those who have wronged people should seek forgiveness.

Testimony
The imam said since his appearance at the TRRC, people have been visiting his house to show solidarity.

“This is a Muslim majority country but many Muslims do not understand their religion because there is nothing wrong in standing for your religion,” he added.
The APRC leader, Fabakary Tombong Jatta, said the visit by the party’s leadership was meant to show solidarity.

“APRC is against anything that contradicts Islam. Whenever there is an issue relating to Islam you will see us. This visit is not political, we just want to show you that we really felt what happened and we are with you,” he added.