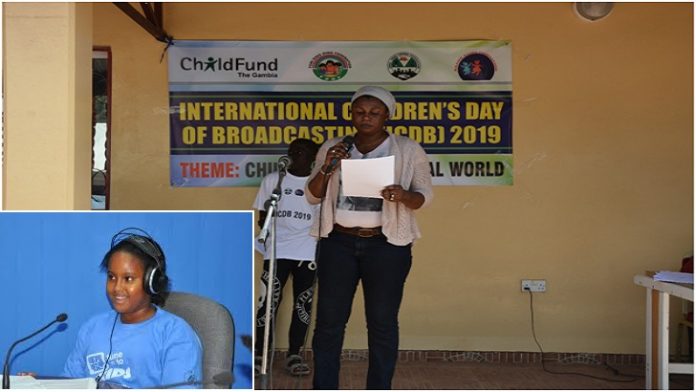 The Gambia joined the rest of the globe last Sunday to mark International Children’s Day of Broadcasting, ICDB.
ICDB was launched by Unicef in 1991 in order to encourage broadcasters worldwide to create awareness for children issues. ICDB, celebrated for sixteen years on the first Sunday in December, was a day when broadcasters around the world “Tuned in to Kids.”
In The Gambia, the day was observed by ChildFund International The Gambia and its local partners.

Activities commemorating the day were staged at the West Coast Governor’s office in Brikama.
A march-pass was organised, and interspersed with dramatic play, cultural performances, poetry and statements by stakeholders including government officials.
ChildFund said it considers ICDB “a unique platform for children to amplify their voices” by talking about issues underpinning their welfare and overall development.
“As an international child-focused organisation, childfund The Gambia very much cherishes an event like the International Children’s Day of Broadcasting,” Musu Kuta Komma, its country director said.

“The event has not only been an important day of our activity calendar, but we have been partnering with different organisations in the recent past to observe the day in recognition of the vast opportunities it offers to children in making their voices heard and showcasing their creative endowment,” the country director stated.
The deputy governor of West Coast Region, Musa Suso, commended the government for “creating an enable environment for the advancement of children and youths of The Gambia.”
Information Minister Ebrima Sillah, also spoke at the event on the significance of the day.