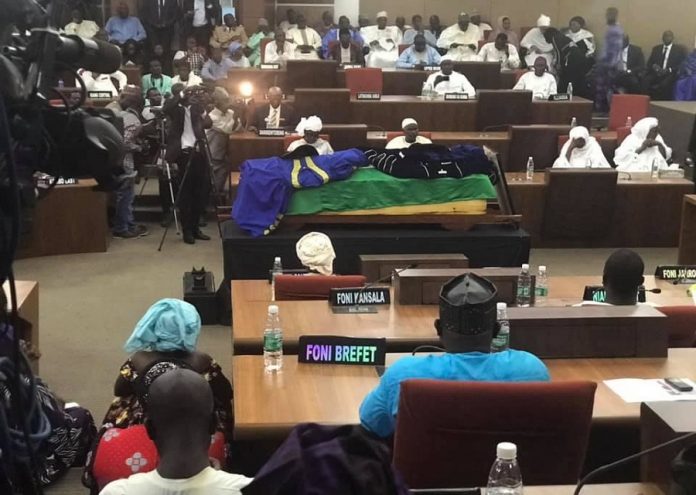 Thousands of people gathered at the National Assembly and the King Fahd Mosque while others watched and followed—in towns and villages across the country—as former president Dawda Jawara received a befitting funeral last night.

At an elaborate ceremony at the national assembly, senior military officers carried Jawara’s coffin to the assembly where numerous speakers paid tribute to his impressive record in office.

President Barrow told the gathering that the country has lost its first leader whose greatness has transformed the country from a colonial state to an independent state and subsequently to a republic.

He further described the late former President as not just the father of the nation but a distinguished statesman who was a true champion of human rights in Africa.

“Jawara was a unifying figure who brought the country together as a champion of peace and unity in Africa,” he said.

Omar Jallow, one of his most devoted disciples, described him as a true muslim and a champion of human rights.
“His everyday thinking and wish was how Gambians can live a respectable and dignified life. He was a humble person who did not tolerate tribalism. You are gone but we will continue to emulate your good values,” OJ said of the man he adored as a political godfather.

The National Assembly Member for Wuli West, Sidia Jatta described the deceased as an immortal who left an indelible footprint in the sands of times.

“Jawara is immortal. This is not an ungodly language.

This means if you live in this world and you don’t want to die you have to leave behind something.

There are people who have died centuries ago but they are living today more than those of us who are living now,” he added.

He continued: “One thing we should learn from this man is tolerance.

This man will be at a meeting and someone will insult him but he had never ordered for anybody’s arrest because you have said anything to him…He would say, always leave him to say whatever he wants to say…That is tolerance.

That is what is called leadership. People must be free to express themselves, of course with respect but you cannot teach people to be respectful if you don’t respect them”.

The Chief Justice Assan Jallow described former President Jawara as someone who respected the law and ensured that everyone who worked under him did the same.

“Jawara was always polite but firm with the dictates of the constitution.

He was a good Muslim who is non-tribalist.

In these difficult times of transformation, we should embrace some of his principles of respect of the rule of law and respect for human rights,” he added.

The funeral was attended by Jawara’s family, with one of his sons, Dawda Junior paying a glowing tribute to his father.