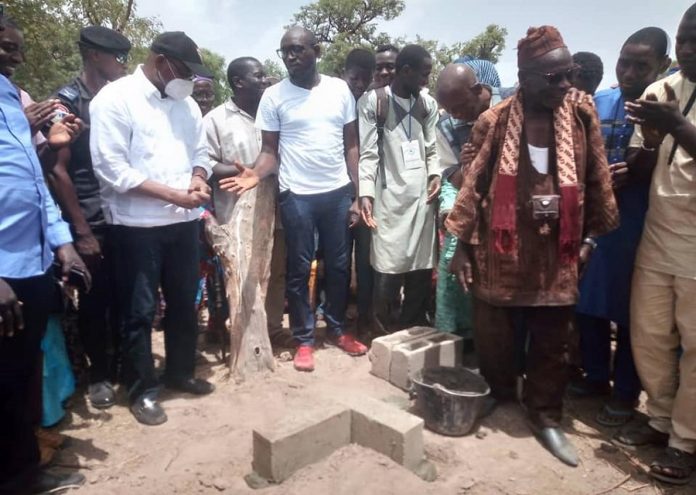 By Mafugi Ceesay, just back from LRR

The Minister of Youth and Sports Hadrammeh Sidibeh on Saturday presided over the official laying of the foundation stone of a multi-million dalasi mini- stadium in Kiang Manduar, in the Lower River Region.
The stadium will be fitted with a 10,000 seater pavilion, dressing rooms and a standard football pitch.

The contract, worth D7, 854, 370, has been awarded to Bala Construction and Engineering Company and it is expected to be completed in six months.
The stadium will serve the entire 21 villages in the Julafarr ward and beyond.
Minister Sidibeh said they have agreed with the contractor to consider hiring people from the benefiting communities with the requisite skills as it may be necessary.
He thanked President Adama Barrow and his government for the project which he described as joy for all Gambian youths.

The occasion was witnessed by a power full delegation from the Gambia Football Federation led by President Lamin Kaba Bajo, local government officials in the region and a cross section of people from the benefiting communities. The Alkalo of Manduar, Kawsu Sanyang welcomed the delegation and pleaded with government to also provide them with a motor-able road network which has been a long and famous problem in that part of the country.

Omar Sise, the Gambia U23 Coach, and a native of Kiang urged the youths to make good use of the facility to excel in football. He assured the youths of his readiness to help them in technical and other matters to develop football in the area. The GFF president Bajo appealed to the community to encourage their children to develop interest in football which can transform their lives in a big and positive way. He promised that his Federation will provide any possible assistance to the facility once completed.