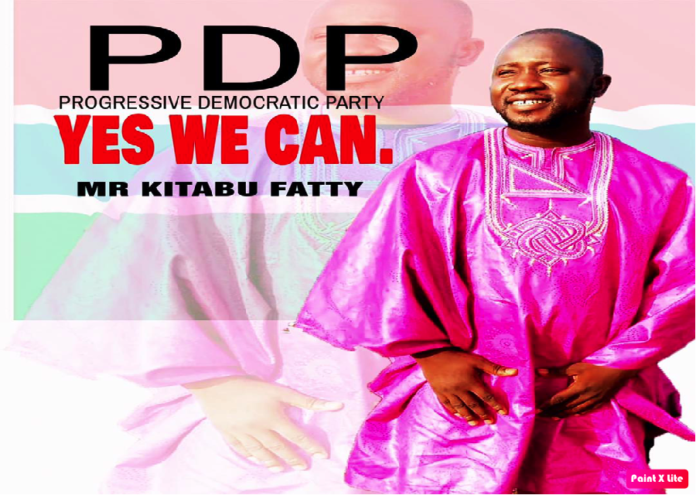 Kitabu Fatty is a popular Mandinka comic actor who recently caused a ripple when he dropped a pebble in the lake by announcing his intention to set up a political party, the Progressive Democratic Party, and run for president of the country. In this edition of Bantaba, Alagie Manneh first asked the Jarra-born funny man whether he is serious about throwing his hat into the political fray.

Kitabu Fatty: It’s true. When the news came out, different things were said but I don’t believe anyone will joke about seeking the presidency. This is not a joke. This is something serious and we stand 100 percent to see that in December we also contest the elections and put in our efforts to take over the country.

You came into prominence following the fall of the Jammeh dictatorship, who exactly is Kitabu?

I am a son of Jarra but I spent my entire childhood in Kombo. I was born in Tonyataba but my father’s mother came from Soma. I was brought up by Baddibunkas in Latrikunda German. The man who brought me up was a school principal, they called him Master Kitabu Ceesay. He taught in many places in Gambia including in Kaiaf, Pakalinding and Jambur.

You are seen as part of a so-called new generation of Gambian comedians who are using the hard-won public space and social media to question the sagas of the past while poking fun at our current leaders, why do you choose to be funny to earn a living?

I love comedy and since I started, people have been saying a lot but I never looked back, until honour and respect found me. Comedy is a decent profession. My comedy is all about teaching. I have never done comedy in school but I was very talented. I have done a lot of things from composing Muslim hymns. I started comedy when I was acting. I focused on developing my skills and Alhamdulillah, I am where I am today.

What are some of the challenges being a comedian in The Gambia?

If I said I didn’t have struggles and challenges and confusions here and there, I would be lying. Indeed, comedians of my status in other countries have achieved much, and their governments put in place mechanisms to ensure they earn a livelihood. But in The Gambia that’s not the case. But Alhmadulillah, I have featured a lot of people including O Boy. Clearly, comedy has brought me rewards. The elders know me, respect and honour me. I was the first comedian to become a subject of a GRTS documentary and I was one of the best comedians in terms of sensitisation and other things.

What schools have you attended?

I stopped at grade 12. Today, in whatever one is engaged in, it’s important to show the people the truth. When I completed grade 12, I went straight into comedy. I wrote and direct my shows. Alhamdulillah, today actors are knowledgeable people. I am a grade 12 graduate but Allah has given me knowledge.

Why politics for you?

In a recent media interview, you criticised politicians for their failed promises; the rising unemployment among young people; and high maternal mortality rates, what is your plan to address those issues?

The one concept I would want to remove from people is the belief that only degree holders can take this country forward. Today, if that is the case, then … because every president you see today is surrounded by degree holder … but what have they done to see that the country is moving forward? The first thing I will do when I become president is to take a look at the health sector because our people urgently need good health service delivery. We will turn almost all the major health centres into hospitals. We will also provide all the resources and medicaments that hospitals need. From there you go to youth unemployment. Today, no one can blame the youths who are embarking on the illegal “backway” to Europe. Why? Because there’s nothing here in this country. The only people who are able to create careers for themselves are artistes and a few others. My party, PDP, will support local businesses and see to it that first class quality furniture is produced here. We will also promote the works of welders. We have the talent here to make our own cars, our own television sets and a whole lot of other things. We will also take our marine resources from the Chinese and give it to the youth so that they can catch fish and sell it to Gambians. We will reduce the taxes on goods and other commodities and focus on developing agriculture.

These are lofty ideas but you are going to need a base to come to power. What is your political constituency?

We have almost 30 WhatsApp forums across the country and in the diaspora. From Jarumeh Koto, Busumbala, Farato to many other places. People have embraced us and love this idea [of seeking the presidency]. We went to greet people in Niumi and upon arrival in Kanuma we were overwhelmed by the crowd. So, we clearly have the support.

A comedian like yourself, Volodymyr Zelensky, was recently voted president of Ukraine. Have you taken any cues from him?

I wasn’t inspired by Zelensky. I think what is important is, anyone who wants to lead must have the country at heart. I have The Gambia at heart and that’s the most important.

They should vote for me because today, we understand politics more than the people involved in politics. There are politicians here who have no clue what they are talking about. But I want to tell the Gambian artistes fraternity to speak the truth when we see the truth. I want to tell them that the time to shy away from politics is not now, that it should stop. If we want to enter politics and lead, let’s do it. People should know that we have the knowledge and the love for the country and we are more than capable to lead. They should vote for us because we will deliver exactly what the country needs.

Corruption has become almost endemic in The Gambia today, how do you intend to fight it?

When we come to power, wherever there is corruption, we will root it out. We will have a special task force that will visit ministries and other departments to find out what’s going on there. We will enact laws that will ensure we eradicate corruption. Today, we know that it’s because of corruption that The Gambia hasn’t reached the level it ought to. The problem is, the people we call technocrats and the men of knowledge, are there to fill their pockets to take care of themselves and their families.

When will the PDP be registered?

We have set up our structures, and our technical team is busy working. Our manifesto and constitution are completed. Our party logo has been designed and the party colour is gold. Our logo has a hand that symbolises transparency. We are working very hard on registering the party. It can happen anytime.

Seeking political office is not for the faint-hearted as it involves a lot of money and planning, where are you getting your funds?

At this moment, we are funding ourselves. No political party is supporting us. We have an agenda and we are just going to sell it to the Gambian people. We are working alone to achieve our aim.

A lot of euphoria greeted the coming of Barrow, now that seemed to have faded, what in your estimation went wrong?

That’s why I told you, let’s pray for a political leader who loves the country. Because when you have that type of a leader, no matter what happens, he would ensure the country moves ahead. So, let the people give chance to PDP. If they do that, it will be a huge blessing for this country.

What is your personal assessment of President Barrow as a leader?

A PDP government will surround itself with people whose desire for nation building far outweighs than even mine. I am not saying those with a desire to steal and be corrupt, but development-oriented desire to move The Gambia forward. That is what The Gambia needs today. If you see young Gambians getting deported and becoming mentally-challenged, it’s not just for nothing, it’s because they had sold their lands and everything they owned in the hope of making a better life. To bring them back to a country where nothing has been moving, where everything remains stagnant, is too hard for them to bear. Nothing is working here. So, this country doesn’t need a leader who does not have the people at heart; what it needs are those who can bring development, and that is PDP.

So, the Barrow government is not good for The Gambia?

Maybe what they are engaged in, they feel that is what they have to do. But for us, what we have seen is a stagnant country that needs urgent development. Look at the number of women dying in our hospitals giving birth.  Why must we take our people to Senegal or do a go-fund-me to ensure that a person has access to healthcare, in a country where there is a government? It’s a shame, the country doesn’t need that type of government in our view. We believe only the PDP can change that.

I want Gambians to know that it is my constitutional right to stand to be voted for political office, and I am in this for The Gambia. If people are saying he’s just an actor, today, I have seen in other places where former footballers have become presidents. And actors have so much knowledge. Look at Zelensky, he was doing a show call The Presidency, and today he is the leader of Ukraine. So, let people not look down on us. Let’s be united and shun things that will not bring progress to The Gambia. My final advice is for politicians to stop the insults and speak about the issues at hand. Let’s be positive and determined to make sure we move this country to the next level.

Thank you and good luck.