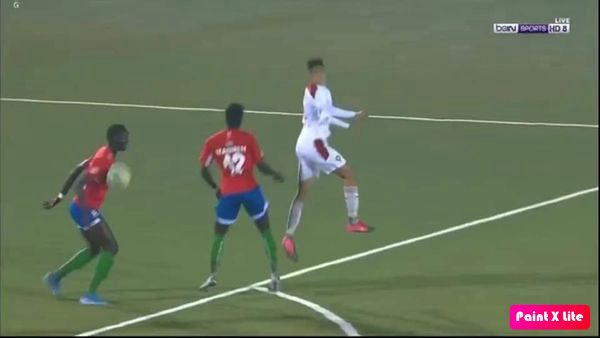 Morocco’s El Mehdi El Moubarik scored from the penalty spot in the 28th minute last night to beat Gambia-1-0 in Group C of the African Youth Championship in Nouadibou, Mauritania.

The opening game for the Wafu Zone A champions ended in a painful experience as Matar Mboge’s boys who stormed the tourney with full confidence having won two tough opponents, Cameroon and Burkina Faso in friendlies days before the tournament, left the field cheated by a cheaply awarded penalty.

The shot was initially taken by Oussama Zemraoui after Edrissa Ceesay was judged to have handled the ball inside the area as he defended a menacing header from the Moroccans. The referee pointed to the spot without hesitation and rather deviously.

Zemraoui’s penalty was saved by Gambian keeper Lamin Saidy, but the referee added salt to the already blood oozing injury of the Gambians by punishing the keeper for moving out of his line early.

Morocco was no longer confident with Zemraoui and changed their penalty taker, this time, Mubarik, who managed to trick the Gambian keeper with a cunning shot. The Young Scorpions were enraged and went into a frenzy but unsuccessful search for an equalizer.  The Young Scorpions reduced the Moroccans to mere bystanders launching vigorous attacks in a desperate fight to pull back the undeserved lead. It would not come. It ended Morocco 1 Gambia 0.

The Gambia’s next opponent is Tanzania, complete strangers to this tourney and the least fancied in the group.

The Black Satellites will next play Morocco on Friday and a win will send them to the knockout stages. The Gambia however must beat the East Africans to begin to put back their campaign on course.