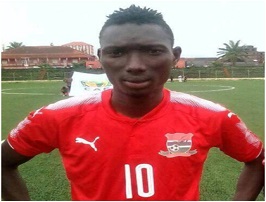 FC Shkupi of Cair, Macedonia, has signed Gambia’s Pa Omar Jobe( Drogba) and Dembo Darboe from Ndiambour in Senegal on a two-year contract.

Omar who previously played for Tallinding United and Real de Banjul is among the high exodus of local players leaving the Senegalese Ligue 1.

The Pigeons as their new team is called, will return to Europa League qualifiers after being knocked out by Rangers of Scotland last season.

“The move is another new thing in my life but it doesn’t mean it’s over.

I have to work extra hard now.

You always have to aim higher. Gambians will be surprised to see me playing in a total different level where they will think I will never reach”, Pa Omar Jobe said.

Meanwhile another Gambian, Dembo Darboe, also signed for the club. The Brikama born scored 12 league goals in the past two seasons for Ndiambour.

“I am very happy, it’s another achievement from the bottom to the top, it’s better than the windfall example from top to bottom.

We have big dreams to make records. Everything is a result of hard work, and I will keep working hard,” Demba commented.