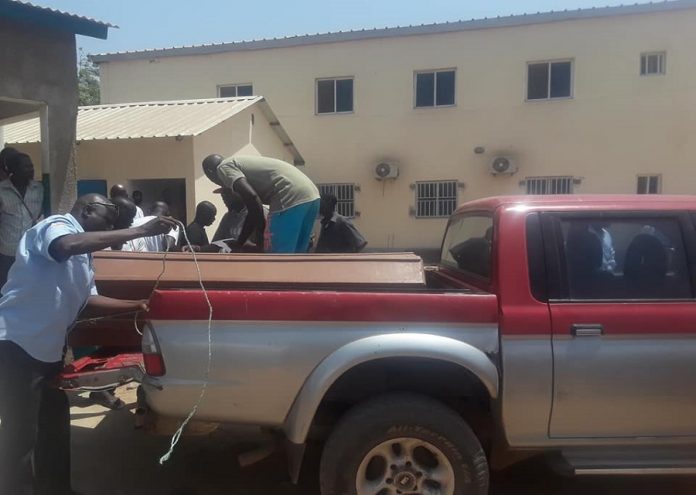 One Buba Jammeh, a native of Gunjur was shot dead on Saturday during clashes between Gunjur and Berending over land issues.
The victim is reported to have been shot by so far unknown assailants or assailant from Berending, a village near Gunjur.
The victim’s dead body was taken to the Gunjur Health Center amid tensions between the two communities.

Aggrieved youths armed with machetes and knives stormed Gunjur Police Station after Jammeh’s death was announced demanding that justice be done.
Residents from both communities were heard chanting, “it is the fault of the government”.
According to sources, shots were also aimed at legs of other victims who sustained injuries.
The Gunjur/Berending land disputes dated back decades ago and last month violent clashes between clans from Gunjur and Berending were reported over the matter.
A prominent activist and native of Gunjur Amadou Scattred Janneh accused the government of negligence.

“My concern is the government has been caught sleeping because this is something that could have been prevented since the early stages. Our mission today is to calm the situation and I am calling on everyone to exercise restraint and give the government 72 hours to act or else we will act,” he told journalists.

The majority leader and national assembly member for Kombo South Kebba K Barrow said all the government organs that are concern in this matter are going to be involved to see how best they can solve the problem amicably to avert any further consequence. The Police were contacted over the weekend but PRO ASP Lamin Njie said they are investigating the matter and will give details as they come, though some sources told The Standard that the IGP was in the area.

ABOUT US
The Standard Newspaper brings the Latest News from the Gambia, Africa and the World. Get live news and latest stories from Politics, Business, Technology, Sports and more. The newspaper is published and printed by XL Standard Co. Ltd. located at Sait Matty Junction, Bakau. Telephone: +220 4496481. Email: info[email protected]
FOLLOW US
© 2020 The Standard Newspaper (The Gambia) - Site by DigiTech Solutions
Translate »