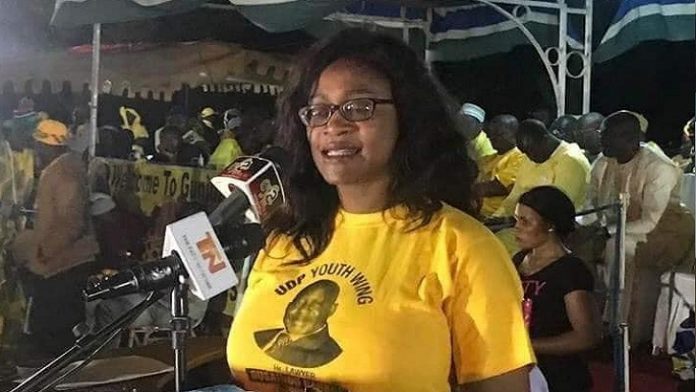 Five Supreme Court judges led by Chief Justice Hassan B Jallow Friday rejected Ya Kumba Jaiteh’s injunction to restrain the swearing-in of Foday Gassama. Gassama was named by President Barrow as Jaiteh’s successor as nominated national assembly member.
Jaiteh on March 5, 2019 sued the attorney general and at least three others over her sacking by the president.

She also appealed to restrain the clerk (1st defendant) and the speaker (2nd defendant) all of the national assembly from bestowing any right, privilege or role on Foday Gassama (3rd defendant) as a member of the national assembly.
The case was heard at the Supreme Court on Thursday with Ya Kumba Jaiteh’s lawyer asking the court to grant their application for an interim order as soon as possible.
However, the application was opposed by the 1st and 2nd defendants represented by the Attorney General, the 3rd defendant not taking part in the proceedings.
Delivering ruling on the matter in a heavily guarded Supreme Court, Chief Justice Hassan B Jallow said the proceedings did not concern the question of whether the revocation of the nomination of Ya Kumba Jaiteh is valid or otherwise.

“That is a question to be determined in the main trial. These interlocutory proceedings are concerned only with the applications by the plaintiff for interim restraining orders pending the determination of that issue,” Justice Jallow added.

He continued: “Having considered the submissions of the parties and on the basis of the legal principle favoring the presumption of the regularity of all official acts, the applicable principles of law relating to the grant of interim restraining orders the court has come to the conclusion that the interim orders applied for by the plaintiff/applicant Ya Kumba Jaiteh should not be granted. The application is accordingly dismissed in its entirety”.
He said the court further considers it necessary to the circumstances of the case, to emphasize that all arrangements for the assumption of office by Foday Gassama as a nominated member of the National Assembly should proceed.

“The plaintiff/applicant is hereby ordered, pending the determination of the suit, not to interfere with that process or with the execution by the third respondent of his duties. The court further emphasizes that this is subject to and without prejudice to the final decision of the court as to whether the nomination of Ya Kumba Jaiteh plaintiff/applicant was validly revoked or otherwise,” Justice Jallow asserted.
Justice Jallow further asserted that the reasons for the dismissal of the application will be incorporated in the final judgment of the court in this case, adding “There will be no order as to costs”.

A large crowd surrounded by heavy security gathered at the Supreme Court in Banjul chanting ‘Never Again’ in solidarity with the embattled national assembly member.
Hearings on the alleged wrongful revocation of the NAM’s nomination resumes March 26.
Jaiteh and her lawyers, visibly upset about the ruling, refused to speak to journalists at the end of the session.

The new President of the Gambia Bar Association, Salieu Taal said ‘this is the verdict of the Supreme Court and we have to respect that.”
Outside the courtroom, several dozen supporters of Jaiteh expressed dissatisfaction over the ruling.