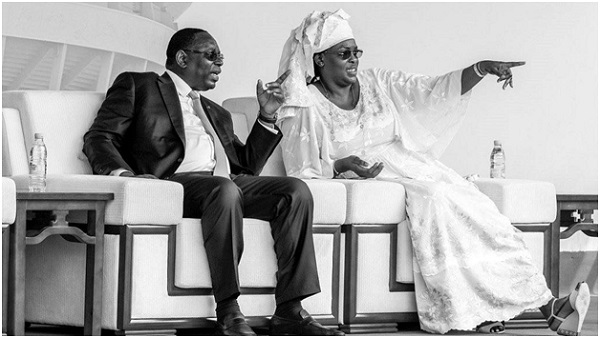 In this edition of African First Ladies,we feature Marieme Faye Sall – the wife of President Macky Sall of Senegal has been Premiere Dame since 2012.

Première Dame du Sénégal or First Lady of Senegal is the title attributed to the wife of the President of Senegal. The country has had four first ladies since post colonial independence, two of whom are of French Origin(Colette Senghore, Vivian Wade) and one of mixed race(Matisse)(Elizabeth Diouf). Marieme Faye Sall is flatteringly described as a “pure”Senegalese first lady. The previous three first ladies were “foreign”.

Senegal’s President Leopold Sedar Senghor (1960-1980),a poet and philosopher became first president of post-colonial Senegal. He was a French-educated Roman Catholic at the head of a predominantly Muslim nation, an intellectual in a country that was extremely poor and rural.Senghor’s first marriage was to Ginette Éboué, (married on 9 September 1946 and divorced in 1955) daughter of Félix Éboué.(a French colonial administrator and the first black French man appointed to a high post in the French colonies, as Governor of Guadeloupe(Caribbean) in 1936).His second wife, Colette Hubert Senghore, from France, became Senegal’s first First Lady upon independence in 1960. 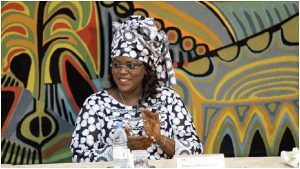 Colette Senghor, described as his “muse” and “gentle companion,” married Senghor in 1957,in an era when mixed-race couples were extremely rare or taboo. At that time, he was a Socialist lawmaker in colonial-era Senegal, who had sprung to international renown for his poetry and ground-breaking theories about “Negritude” — the black African experience. He was re-elected president in 1963 and stayed at the helm until 1980.Colette Senghor was well known for her elegance and discretion. “(She) always supported her husband in his political life and was the source of his inspiration in his artistic life,”. In 1960, when Senegal gained independence from France, he became its first president and even drafted the national anthem.

The country’s second first lady was Elizabeth Diouf ; a matisse (Lebanese father and a Senegalese mother.)Abdou Diouf, the second President of Senegal,was in office from 1981 to 2000.

Unlike her predecessor who was content to be a companion to her husband, Elizabeth Diouf was involved in state affairs.After taking part at the first ever First Ladies Summit on the Economic Promotion of Rural Women, organized by IFADin Geneva 1992, she started a “Foundation”with an Acronym of “Solidarity and Sharing” for a new world of love. She was known for her continuous appeal to the western community for the total debt write-off that was choking Africa and other poor countries if not its conversion to programmes and projects for rural women in Africa.

Like Colette Senghor, Vivian Wade, Senegal’s third first lady, was also an ethnic French woman.As the wife of President Abdoulaye Wade she served as First Lady of Senegal(2000 to 2012).

Madame Vivian was known for her pet projects. Confident in the immense talent and creativity of the Senegalese people, she had already in 1977 supported women’s promotion groups active in sewing and embroidery, as well as being a patron of the Arts. her “Education-Health Association(Education-Sante)an association that focused on three sectors: education, health and development in an integrated manner. In short the simple idea that if organized, there can be sustainable development only if the populations concerned are involved in their own development,so as to no longer depend entirely on the State.”

However, Mrs. Viviane Wade, after the end of her husband’s Presidency, decided to close down and dissolve the Education and Health foundation (Agir pour l’Education et la Santé foundation),which had initiated good actions during the time that President Wade wasin power.

Marieme Faye Sall
Born in Saint-Louis (northern part of the country), the fourth child of a family of eight, Marieme attended primary school before moving to Diourbel (central region of Senegal) with her family. She attended the Higher Institute of Technology at Cheikh Anta Diop University in Dakar with the ambition of pursuing a career in electrical engineering, and specialized in electro-technical engineering. After graduating and after giving birth to her first child,she decided to dedicate herself entirely to raising her family.

Given her Peule and Serer descent, and having grown up in a Wolof environment, she was immersed from a very early age in the values that now underpin the multiethnic stability of Senegal. Committed to a peaceful family life, she has attracted unanimous acclaim for her genuine humility and great ability to listen and communicate with the poorest of the population and with young people. Mrs. Sall, a devout Muslim and mother of three, has one passion: her husband and her children.

A “new era” of hope…?
Her husband president Macky Sall, had promised to usher in a “new era” for the West African country. Yet, it was his wife who had sparked particular excitement among Senegalese women, who believed that for the first time one of their ownwas taking up residence in the presidential palace as the nation’s first lady.

In addition to this, Marieme Faye Sall, the country’s first born-and-bred Senegalese first lady is said to have brought an “African flavor” to the state residence. Sall described as a “real Senegalese lady”with simple and wholesome tastes and style, appears discrete and modest, (an important aspect of Senegalese culture). Sall is known for not meddling in her husband’s political career.

Since her predecessors have typically taken on charitable causes, seven years down the line, with her “Serve Senegal” foundation, many Senegalese women still see her as a powerful advocate on their behalf; the first lady understands the difficulties that Senegalese women face especially those in rural areas.

Mrs. Sall is proud to have contributed, alongside her husband before and during the 2012 electoral campaign and since his reaching the nation’s highest office, in making Senegal a new centre of humanism, with equitable and transparent sharing of opportunities that benefit the most disenfranchised populations and those made vulnerable by adverse conditions.

Foundation ”Serve Senegal”- a broad spectrum
From the very announcement that the Serve Senegal Foundation was to be founded, Mrs Marième Faye Sall, who leads the foundation with a Board of Directors made up of prominent figures all working on a volunteer basis, has “directed her leaning for discreet humanitarian and social action to the benefit of those who need it most, an outpouring of generosity, motivated by the desire to make equity serve all and an unshakeable faith in a Senegal of stability and innovation that benefits the country and Africa”.

Her philanthropic work varies from helping patients who urgently needed the chance to receive hemo-dialysis and renal care, to a population in distress in the flooded bottomlands, to the most impoverished fisherwomen, and the neediest pilgrims traveling to the Holy Places of Islam.

In short this broad-spectrum foundation with a vision to contribute to the economic and social promotion of a Senegal of prosperity and well-being aims to provide medical support to the most disadvantaged, in particular as pertains to hygiene and prevention.
2Provide support to hospital or health facilities by improving their equipment and thereby enable better access to care across the population.
3Facilitate access to drinking water by building, refurbishing, and maintaining drinking water sources.

4Give logistical and financial support in the fields of education, health, and the environment.
5Contribute to the funding, building, and renewing of health centers or dispensaries.
6Promote the building, renovation, and up-keep of places of worship.
7Provide appropriate support to educational institutions and students by adding to their educational resources.

8Stimulate and promote all scientific research in the fields referred to above through a variety of actions, including the creation of a prize rewarding scientific work.
That was all for the First Lady of our next-door neighbor, Senegal. Next week, we will bring you another interesting African first lady, Jeannette Kagame whose husband, Paul, is wowing the whole world with unrivaled development in Rwanda.