May the tree of China-Gambia friendship be ever green 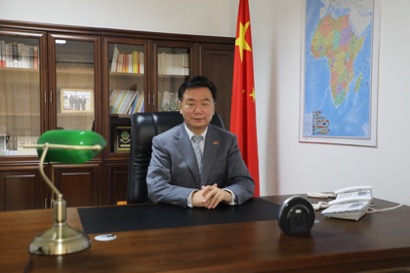 By H.E. MA Jianchun, Ambassador of the
People’s Republic of China to The Gambia

March 17 marks the 5th anniversary of the resumption of diplomatic relations between China and The Gambia. Over the past 5 years, China and The Gambia have been working together in fostering strong friendship and adding new momentum to the building of a China-Africa community with a shared future.
Over the past 5 years, China-Gambia mutual political trust was elevated to a higher level. H.E. President Adama Barrow twice visited China and met with H.E. President Xi Jinping. The two leaders expressed firm support to each other on issues related to each other’s core interests and major concerns. High-level exchanges between the two countries were frequent. The Vice Chairman of the Chinese People’s Political Consultative Conference Ma Peihua attended President Barrow’s inauguration ceremony as President Xi Jinping’s special envoy. The Speaker of the Gambian National Assembly Mariam Jack-Denton visited China. Bilateral friendship groups were also established in the national legislatures of the two countries. The foreign ministers of China and The Gambia exchanged visits and established a ministerial consultation mechanism. On multilateral occasions, The Gambia assured the Chinese side of its firm commitment to the one-China policy, consolidating the political foundation for the comprehensive and healthy development of the bilateral relations of China and The Gambia.
Over the past 5 years, We have strengthened practical cooperation under the framework of the Forum on China-Africa Cooperation (FOCAC). The establishment of the FOCAC in 2000 created the China-Africa friendship family with its own collective dialogue platform and practical cooperation mechanism. In September 2018, H.E. President Barrow went to China to attend the FOCAC Beijing Summit, and The Gambia officially joined the FOCAC family. In the past three years, we have been actively implementing the important consensus of the two heads of state and the outcomes of the FOCAC Beijing Summit. For instance, the Sir Dawda Kairaba Jawara International Conference Center, built under the cooperation of the two countries, has been in operation and will be the main venue of the OIC 2022 Summit. The two sides are working closely on the highly-anticipated URR Road and Bridge project, it is getting close to completion, and it will effectively improve the transportation condition of people on both sides of The Gambia River. Recently, We have been working together to fight the COVID-19. The Chinese side donated a large quantity of anti-epidemic supplies and helped The Gambia contain the virus. The Chinese anti-epidemic medical experts have provided medical treatment for the people of The Gambia, which has effectively safeguarded the lives and health of the people. Just as an ancient Chinese saying tells, there is not a spring that will not come. China will assist The Gambia in fighting the pandemic and recovering the economy, and take practical actions to implement the initiatives to assist Africa announced by President Xi Jinping at the Extraordinary China-Africa Summit on Solidarity against COVID-19.
Over the past 5 years, we have seen essential progress in cultural exchanges. In October 2019, the Confucius Institute at the University of The Gambia was officially established, providing a new gateway for further mutual understanding between the people of China and that of The Gambia. In January 2020, the Gansu Provincial Art Troupe arrived in The Gambia to hold the “Happy Chinese New Year” cultural performance. The magnificent Chinese traditional singing and dancing art won high praise from the Gambians friends, adding new momentum to the deepening of the friendship of our two peoples. Under the framework of the FOCAC, we have provided nearly 900 capacity building opportunities to The Gambia and sent more than 140 students of Chinese government scholarship to study in China, nurturing economic builders of The Gambia and China-Gambia friendship ambassadors. Although China and The Gambia are culturally different and geographically far apart, both countries are committed to improving mutual understanding and sincere cooperation, as people-to-people exchanges are increasing.
All these achievements prove that the resumption of diplomatic relations between China and The Gambia served the fundamental interests of our two countries and our peoples, and was in line with the common will of the Chinese and The Gambian people for solidarity and cooperation. Undoubtedly, to restore diplomatic relations was a wise decision made by leaders of the two countries with historical and strategic thoughts.
Looking forward, we will see a brighter future in China-Gambia cooperation under the framework of FOCAC. By the end of this year, a new session of the FOCAC high-level meeting is expected to be held in Senegal. It will draw up a blueprint for China-Africa cooperation in the next three years. China is ready to take this opportunity to support Africa’s efforts to defeat the virus and strengthen public health governance, to accelerate industrialization and build up capacity for self-generated development, to speed up African integration and embrace the trend of economic globalization, and to find political solutions to hotspot issues and maintain peace and stability on the continent.
As China’s State Councilor and Foreign Minister Wang Yi said at the press conference of Chinese National People’s Congress, “China and Africa enjoy a profound friendship forged during the struggle for national independence and liberation. We are comrades-in-arms as well as brothers and sisters. This bond of friendship is growing ever stronger as time goes by. China and Africa are perpetual good friends and good partners with a shared future.” We believe that with the further development and deepening of the relationship between China and The Gambia, we will see more cooperation achievements materializing in The Gambia, making positive contributions to the economic development and improvement of people’s livelihood in The Gambia. I sincerely wish the tree of China-Gambia friendship to be evergreen.