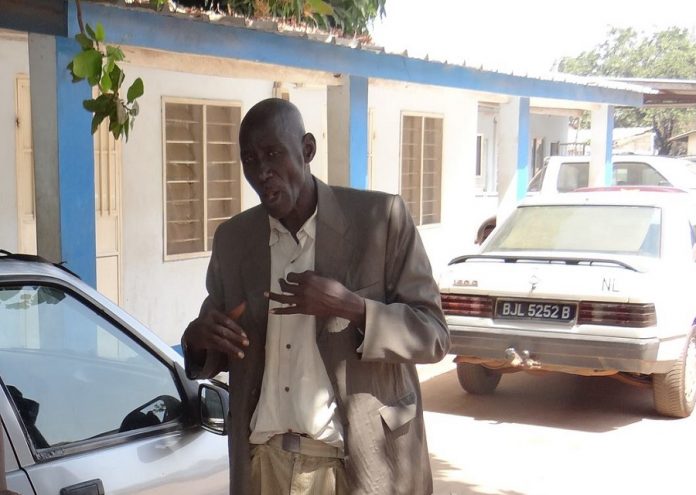 Jongkunda Daffeh was born in 1947. In 1967, he finished at the top of his A Levels Class in Pure Maths! ‘But I had prize-winning aptitude in history, literature, French, and Latin also’, he told me in an interview, a few years ago. In 1967-1968, he was pupil teacher at Armitage High School, then very prestigious. In 1968-1969, he taught at Crab Island School, then a nursery for activists and political hotheads. In 1969-1970, he worked as assistant reporter at Information Department, sub-editing The Gambia News Bulletin. In late 1970, he flew to Paris, France, for further studies. In a short period of three years, Jongkunda had garnered profound experience in teaching and newspaper work. But he had gathered experience in other areas too!

He helped to mobilise Gambian youths to vote YES for the 1970 Referendum which took The Gambia into republican status. As a member of the Ad-hoc Committee of The Gambia National Youth Council, he toured the country telling youths to end the last relics of colonial rule by voting for a Republic of The Gambia! Therefore, thanks to Jongkunda’s efforts, The Gambia became a sovereign and free republic. “I was very clear in our rallies: I said we the youths need ‘complete national independence’”, he told me in a rare interview on 29 April 2014, at my office at the National Museum, Banjul.

But Jongkunda refused to support Jawara government’s invitation to President Senghor of Senegal to The Gambia on a state visit. The youth council worked with subterranean youth groups like the ‘Kent Street Vous’ and ‘Fansoto’ to disrupt Senghor’s visit. Tear gas welcomed the Senegal poet-president at Clifton Road, now Independence Drive. Jongkunda worked with other activists to protest along the route of the state visitor and they succeeded in making Senghor cut short his visit. “Senghor was a neocolonialist. He had just put down a popular student uprising in Dakar University in 1968. He refused to allow Amilcar Cabral’s PAIGC use Senegal territory to fight for their independence against the Portuguese colonial rulers. He was jailing Cheik Anta Diop and other progressive Senegal leaders. So for us in the pan-Africanist youth movement in Bathurst, Senghor was an unwelcome guest”, he told me. Thanks to Jongkunda’s intrepid leadership, Senghor gave up all ideas of annexing The Gambia or taking President Jawara into the neocolonial fold.

More, in 1969, Jongkunda used his position in the Youth Council to welcome Miriam Makeba and Stokley Carmichael aka Kwame Ture, the great Black Panther and pan-Africanist, to Bathurst, The Gambia. The popular couple were given a hero’s welcome. They met Jawara, and held numerous meetings at Gambia High School Hall and Brikama Youth Centre, preaching the Black Panther ideology of Black Power. For a short period during their visit, our The Gambia was the mecca of pan-Africansim, anti-Apartheid, Black Power and left wing activism against imperialists. Thanks to Jongkunda’s inimitable mobilising skills, the Makeba-Carmichael visit became a great success.

What was also a great success were Jongkunda’s academic journeys. He read greatly and widely such that by 1972, he was in the league of great thinkers like Daniel Cohn Bendit, the German avant garde intellectual, who led the 1968 student uprising in Paris which almost brought De Gaulle’s right wing government down. Bendit saw in Jongkunda an effervescent Marxist intellectual! From Paris, Jongkunda went to USA, where he joined the Student Non-Violence Coalition(SNCC), which was fighting the kind of racial injustice that led to the murder last week by police of the Black American, George Floyd. Jongkunda rose through the ranks of the SNCC so quickly that US police hunted for him. They got him. That is where his mental troubles started.

Where I will end this piece is that when he was forcibly returned home in the late 1970s, he was a mental wreck by design, most likely as he had been adjudged a “dangerous and calculated Bolshevik mass organizer” by the Western intelligence agencies. They told Gambian police at the Yundum airport: “Watch this man, he is dangerous”. Nana Grey Johnson has written eloquently on this troubling stage of Jongkunda’s life; so I need not say more.

Except to add that Jongkunda rested a while and then went back into journalism. It was a brilliant sojourn. Be it the Sun, Hibarr, Sun-Torch, Jongkunda wrote the most profound editorials in town. It was thanks to journalists like Jongkunda that the Jawara regime became respected as the champion for human rights in Africa. Because Jongkunda and others used the liberal space the Gambian constitution afforded them to scrutinise, criticise government policies and personalities. His ilk did not wallow in cheap penmanship, or inchoate journalism. They did it maturely with decorum, firmness and stealth, sometimes.

For example, in 1986, Jongkunda went to the Royal Victoria Hospital in Banjul armed with his recorder. He had been told by a source that the jailed Gambian intellectual and politician Pap Cheyassin Secka, was sick and would be in hospital that morning. For nearly a lustrum, Pap, a brilliant Gambian Marxist theoretician and alumni of Columbia University, was held in solitary confinement at Mile 2 Prison. Gambians were curious to hear from him. Jongkunda put his small recorder in a thermo flask and gave it to a nurse saying that it was hot water for Pap. Pap, did what he should do and returned the thermo to the nurse who gave it to the crusading journalist Jongkunda. The next day, Jongkunda wrote a five page transcript of Pap’s interview. But it was final line of the editorial that caught my eye: “I know Pap is worth to The Gambia more outside of jail than inside it. I know also that Jawara, the Fount of Mercy, knows this. I know Jawara loves The Gambia just as Pap. Pap has no place in jail. Let Pap out!’ A few years later, Jawara pardoned Pap.
My uncle and friend Jongkunda has been missing in action for nearly three weeks now. ‘Missing in Action’, because he remains a soldier for liberation, free thought, conscience, and humanism. I pray that he is safe and sound. I pray that he returns to family and friends soon.

It was the great poet, Henry Wadsworth Longfellow, who famously penned this reassuring truth: Lives of great men all remind us We can make...
Read more
Appreciation