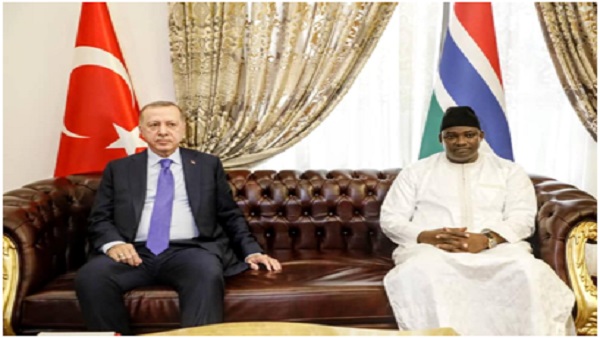 Following a closed-door meeting with his Turkish counterpart, President Erdogan, President Barrow said his government is ready to deepen and explore economic engagements with Turkey, through foreign direct investment.

The Turkish President, accompanied by the First Lady Emine Erdogan and high-ranking officials of his government, was on a day’s visit to The Gambia, to strengthen the already strong ties between the two countries, as the first-ever Turkish President to visit The Gambia.

Reflecting on the outcome of his last visit to Ankara, President Barrow said the formation of the Joint Economic Commission is evident in the flagship position within the cooperation between the two countries, on matters of trade and investment, which is vital for the private sectors of both countries.

”Through these partnerships, we have witnessed the commencement of the Banjul-Istanbul route with Turkish Airlines, thus opening up new frontiers in the business between our two countries”.

While commending Turkey for the support towards the transitional programme of his government, President Barrow said it demonstrates the high-level cooperation between the two countries.

”My government also gains your support to build the capacity of our security forces by training 500 officers on peacekeeping”, he noted, adding that he appreciates the pledges made during his last visit to Ankara to build a children’s hospital and office space for Parliamentarians.

President Barrow highlighted Turkey’s role, which he described as ‘instrumental’ in supporting the Gambia’s hosting of the OIC, sharing the Turkish experience in hosting such a world event.

”Your visit will further strengthen our bilateral cooperation and mutual interest to promote socio-economic development of our people”, he said to President Erdogan.