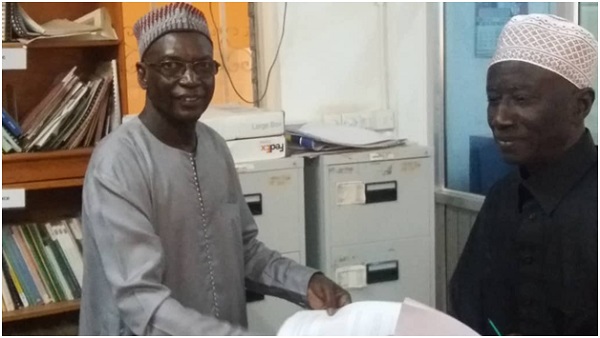 National Council for Civic Education (NCCE) and the Tango – the association of non-governmental organisations (TANGO) recently signed a Memorandum of Understanding (MoU) to promote human rights in The Gambia.
The two partners will do this through the implementation of the ‘Strengthening Human Rights and Good Governance in The Gambia’ project, also called the “Democracy Project”.

The project is funded by the United Nations Democracy Fund (UNDEF) and will be implemented over a period of two (2) years, from April 2019 to March, 2020. The project is an awareness creation and advocacy activity that will seek to engage all sectors of the Gambian society in a drive to contribute to the democratisation process of the country.
Speaking at the signing ceremony, the executive director of Tango, Ousman Yabo, said NCCE will be implementing a major component of the project, which is civic education.
He said this is due to the mandate and expertise of the NCCE in terms of civic education and awareness creation in communities.

Yabo reaffirmed Tango’s confidence in NCCE in the implementation of the project, saying it is the “right partner” for the project. He thanked the civic body for the commitment in serving the nation through civic engagements.
The chairman of NCCE, Alh Sering Fye, assured Tango of NCCE’s “willingness and commitment” to collaborate and cooperate throughout the course of the implementation of the project especially in the area of civic education in communities across the country as stated in the MOU.
Other speakers were Ms Ida Jobe, and Yusupha Bojang, council member and programme manager of NCCE respectively.