A high-level delegation from the National Commission for Civic Education (NCCE) paid a visit to Ghana's Commission to understudy its civic education system. 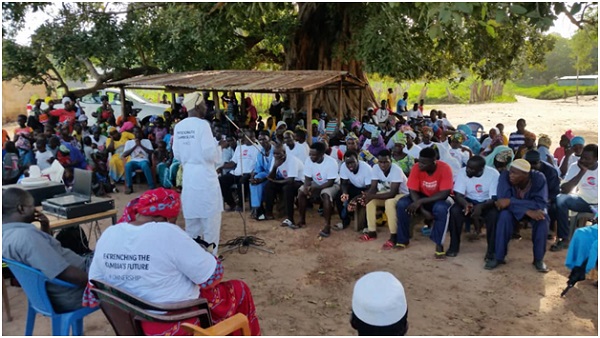 A high-level delegation from the National Commission for Civic Education (NCCE) paid a visit to Ghana’s Commission to understudy its civic education system.

The seven-member delegation, led by Alhagie Sering Fye, President of the Gambian Commission, joined the Volta Regional Office of Ghana’s National Commission for Civic Education at Hatorgodo, a fishing community in the Keta Municipality for an Anti-Corruption and Social Auditing engagement.

Mr Fye told the media the visit was to find ways by which the two Commissions could support each other. “Ghana and The Gambia are two different countries, but our economy and our problems are the same. So by coming here, we learn a lot and I think we should be ready to share information. We should be ready to support and try to help each other”, he said.

Mr Fye at the engagement advised Ghanaians to see community projects as theirs and own them.

He asked that a “bottom-up” approach be adopted in prioritising community needs, and initiate projects themselves while seeking central government support.

Mr Fye said it would lead to cordial, understandable and mutually beneficial relationship with central authorities implementing projects and implored the citizenry to support the government’s development agenda, saying the support of the people and their active participation was needed for national development.
“The progress of every nation largely depends on the active involvement of its citizens,” he told them. “The people must therefore see themselves as partners in development, but not spectators.”

Ms Meria Dacosta, a member of the Gambian Commission urged people in leadership positions to consider themselves servants of the nation and not lords.

Kenneth Kponor, Volta Regional Director of NCCE said the delegation’s tour inspired staff of the Commission in the Region.

The community engagement was organised by the local office of the NCCE on the theme: “Citizens for Transparency and Accountability”, with support from the European Union (EU) under its Accountability, Rule of Law and Anti-Corruption Project (Arap).

Arap seeks to promote community ownership of development projects and policies, increase awareness of the operations of the Local Government, and empower the citizenry to demand accountability from duty bearers.

It is a joint anti-corruption initiative between the Government of Ghana (GoG) and the E.U. which integrates the National Anti-Corruption Action Plan (Nacap) in its design.