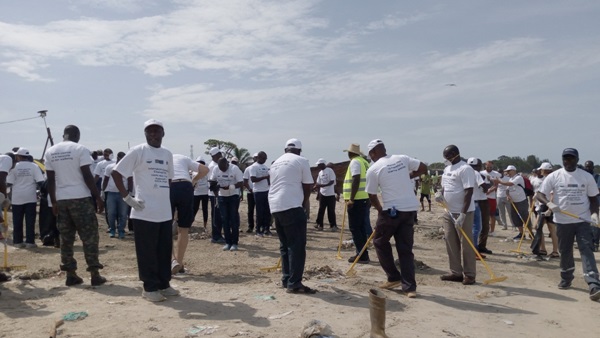 The National Environment Agency, NEA, over the weekend joined the rest of the globe to observe International Coastal Cleanup Day.

It was marked under the theme ‘Heal the Bay’.

The Day is observed on the fourth Saturday of every September. Volunteers from all over the world do their part on this day, cleaning local beaches, rivers, creeks and parks.

The Day is also to increase public awareness on the effects of littering on the coastline.

As part of activities marking the event, the NEA in collaboration with stakeholders embarked on a massive cleanup exercise along the coastline from Banjul ferry terminal to Kartong fish landing site to Barra.

Speaking on the event, the executive director of NEA, Dodou Trawaly, said: “We are expecting people to come out in their large numbers to help save our marine species from being either killed as a result of waste in the oceans.”

A clean beach is needed for The Gambia as the beach is one of the resources that sells the country as a tourist destination, he added.

Environment minister Lamin Dibba, called the Day an opportunity to participate in addressing issues facing our beaches by cleaning up the wastes left by visitors on a daily basis.

Attila Lajos, the EU ambassador to The Gambia, praised NEA for taking the initiative to encourage the proper disposal of waste.

“We can prevent the growing tides of plastics from entering the oceans,” he said.